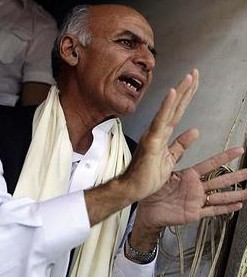 hether wrapped in a shawl for a televised debate, sitting on a dirt floor with a shopkeeper, or thundering over speakers in a dust storm, Ashraf Ghani, the most educated and Westernized of Afghanistan’s presidential candidates, is shaking up the campaign before Thursday’s election in unusual ways.

A former finance minister with a background in American academia and at the World Bank, Mr. Ghani, 60, says he is trying to change politics in Afghanistan. Using television and radio, Internet donations and student volunteers, as well as traditional networks like religious councils, he is seeking to reach out to young people, women and the poor, and do the unexpected: defeat President Hamid Karzai.

Mr. Ghani’s national support is hard to gauge — one recent poll put it at just 4 percent — and he probably remains an outsider in the race, trailing Mr. Karzai and his main challenger, Abdullah Abdullah, both of whom have much larger power bases. [continued…] 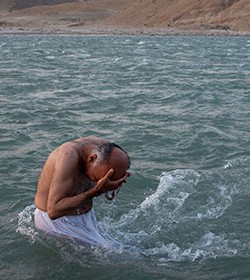 midst a presidential slate now culled to 36 contenders, Ghani, a non-aligned independent, is currently in third place, according to the polls, a Ghilzai Pashtun (that’s good) undercut by a perceived poor grasp of the country’s internecine tribal politics, with no traction among the kingmaker warlords (that’s bad).

He can be acerbic and provocative, berating the administration of President Hamid Karzai at every turn as corrupt and incompetent. (Karzai declined to participate in yesterday’s debate – which aired live on national radio – but called a press conference a few hours later to unveil his wide-ranging manifesto for Afghanistan.)

Ghani’s resume bona fides include introducing a new Afghan currency during his finance ministry tenure, initiating the extraordinarily successful National Solidarity Program that has dispersed $500 million (U.S.) in World Bank aid to 23,000 villages and overseeing the private sector launch of competitive telecom companies – 7.5 million cellphones now in use, generating $1 billion in tax revenues for the government. Even poor goatherds in rural Afghanistan have cellphones.

The numbers are blinding. But in a country where 70 per cent of the citizenry is illiterate and big-picture macroeconomics incomprehensible, this is not the stuff of populist appeal. [continued…] 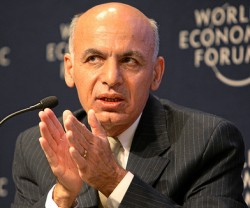 Editor’s Comment — Funny how the Western media, clearly enamored with Ghani’s Western enculturation, is now happy to promote his “Gandhi” image. It makes you wonder whether his campaign adviser, James Carville — to whom the differences between Afghan and Indian culture probably mean little — couldn’t resist making a connection between Ghani and Gandhi on the silly basis that they are just one letter apart.

A series of secret ceasefire deals have been agreed with Taliban commanders to ensure that voting can go ahead in Afghanistan’s volatile south during next week’s presidential elections.

Under the deals, brokered by Ahmed Wali Karzai – the controversial brother and campaign manager of the president, Hamid Karzai – individual Taliban commanders will agree to pull back on election day and allow the Afghan army and police to secure the polling centres.

A Nato spokesman confirmed that a number of deals between the Afghan government and insurgents were in the pipeline, saying: “We support any initiative that enhances security and enables the people of Afghanistan to vote.”

The US embassy has given its blessing to the plan, which was discussed last week at a joint meeting of the country’s national security chiefs. [continued…]

Obama administration officials say the U.S. will largely leave the [opium poppy] eradication business and instead focus on giving Afghan farmers other ways of earning a living.

The new $300 million effort will give micro-grants to Afghan food-processing and food-storage businesses, fund the construction of new roads and irrigation channels, and sell Afghan farmers fruit seed and livestock at a heavy discount. The U.S. is spending six times as much on the push this year as the $50 million it spent in 2008.

“We’re trying to give the farmers alternatives so they can move away from the poppy culture without suffering massive unemployment and poverty,” says Rory Donohoe, the U.S. Agency for International Development official leading the drive. “The idea is to make it easier for farmers to make the right choice.” [continued…]