Inside the Taliban: ‘The more troops they send, the more targets we have’
By Ghaith Abdul-Ahad, The Guardian, August 15, 2009 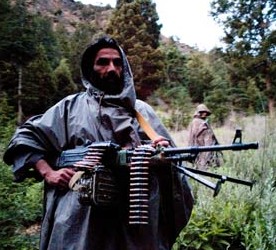 nstead of the trademark Taliban uniforms of turbans, eyeliner and flip-flops, these men wore Russian and Nato poncho raincoats over their shalwars, and boots and trainers. Most striking was the way they held their guns. Instead of carrying them in the standard militia style, on their shoulders or holding them like walking sticks, they wore them strapped around their chests, one hand by the trigger and the other holding the muzzle down. They stood just like the Americans.

The stout commander, Mawlawi Jalali, sat surrounded by his men. One carried the white flag of the Taliban and another a video camera, which he kept pointed at me at all times. 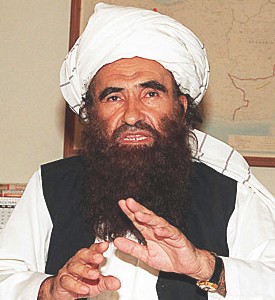 “We are Afghans fighting the jihad and defending our country under the leadership of Jalaluddin Haqqani,” the commander said. He spoke in a schoolmasterly tone. As well as being a commander, Mawlawi Jalali is a teacher in Haqqani’s madrasa.

“The Americans toppled the emirate [of the Taliban] and we are fighting to bring it back. When the Taliban were here the jihad was only in Afghanistan. Now, thanks to the Americans, the jihad has spread to many other countries.”

What about the new American surge, I asked. Did it concern him?

“We attack the towns, like in Wazi Zadran, where there is a strong American and Afghan garrison, and mine the streets every day. We average two or three attacks a day against the Americans and their allies. The more troops they send, the more targets we have, so it’s good.” [continued…]

Also, the Taliban do not get most of their money from narcotics, as is often said, but they receive a significant amount from private donors in the Gulf or elsewhere in the Islamic world who are much less keen to pay for violence directed at voting Afghans than strikes on western troops or their “stooges”.

So it makes sense that the Taliban, or in this case probably the allied insurgent group led by hardline cleric and warlord Jalaluddin Haqqani, have preferred to launch the first genuinely spectacular strike since the beginning of the election campaign against a diplomatic western target.

As their spokesman explained, rather than hit the military, the Taliban would have preferred dead diplomats. Though a bomb outside the Isaf headquarters would show the insurgents’ ability to strike anywhere, their key target is international public opinion. Given the number of journalists and TV crews in the Afghan capital to cover the elections, a spectacular suicide bombing was always going to be an easy way of getting the media coverage that they need. [continued…]

Afghanistan has quietly passed a law permitting Shia men to deny their wives food and sustenance if they refuse to obey their husbands’ sexual demands, despite international outrage over an earlier version of the legislation which President Hamid Karzai had promised to review.

The new final draft of the legislation also grants guardianship of children exclusively to their fathers and grandfathers, and requires women to get permission from their husbands to work.

“It also effectively allows a rapist to avoid prosecution by paying ‘blood money’ to a girl who was injured when he raped her,” the US charity Human Rights Watch said. [continued…]