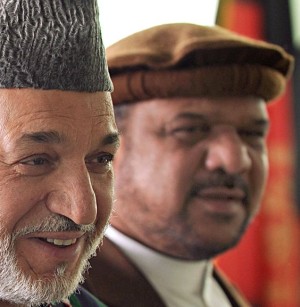 t was a heated debate during the Bush administration: What to do about evidence that Afghanistan’s powerful defense minister was involved in drug trafficking? Officials from the time say they needed him to help run the troubled country. So the answer, in the end: look the other way.

Today that debate will be even more fraught for a new administration, for the former defense minister, Marshal Muhammad Qasim Fahim, stands a strong chance of becoming the next vice president of Afghanistan.

In his bid for re-election, President Hamid Karzai of Afghanistan has surrounded himself with checkered figures who could bring him votes: warlords suspected of war crimes, corruption and trafficking in the country’s lucrative poppy crop. But none is as influential as Marshal Fahim, his running mate, whose trajectory in and out of power, and American favor, says much about the struggle the United States has had in dealing with corruption in Afghanistan. [continued…]

This city is no stranger to bombings. There have been many here over the years of war. But the one on Tuesday night — the deadliest — may have done more than any other to deepen Kandahar’s sense of isolation and tip its people into despair that someone, anyone, has the power to halt the mayhem that surrounds them.

The bombing produced an entire city block of devastation, gutting shops and homes and reducing many of the structures to mounds of rubble. On Wednesday, residents searched at the scene and hospitals for missing loved ones, as the death toll rose to 41, with more than 60 wounded.

Abdul Nabi, 45, a shopkeeper, could find only two of his six sons in the wreckage. “I rushed to the hospital and found my sons in very bad condition,” he said. “Three of my sons are still unconscious. One 7-year-old son just opened his eyes now.

“To whom shall I complain?” he asked. [continued…]

2009 turned out to be a much more violent year [than 2004 when elections took place], with Taliban attacks reaching the heart of the capital and the Kabul administration and its international allies having lost credibility both in terms of delivering peace or improving the people’s living conditions. And yet millions of Afghans risked their lives, ventured out and cast their votes fully aware that voting meant taking a serious risk and knowing very well that the election would be fraudulent and the candidates most probably either lying or making empty promises. Afghan and international observers celebrate this as evidence that Afghanistan has moved forward and is no longer an essentially tribal society upon whom the West has imposed democracy by sheer force of military. In brief, a success story.

The recently published preliminary results based on a random sample of one million votes tell a different story. According to the sample, the people’s verdict has given rise to two leaders, Karzai closely followed by Abdullah Abdullah. In other words, a Pashtun leader followed closely by a half-Tajik leader with a majority Tajik support base. This is what analysts call “identity voting”. The preliminary results show that Karzai’s attempt at nation-building has failed and most Afghans’ loyalty lies first with their ethnic group, and then the nation as a whole. Karzai’s critics have repeatedly pointed out that his nation-building attempts have been largely superficial, consisting on throwing dinner parties for discredited leaders of ethnic and religious minority groups. In the words of presidential candidate Ramazan Bashardost, making a Hazara leader sit next to nomadic Pashtun leader at dinner is not exactly nation-building. The many mass graves scattered around the country bear witness to the ethnic rivalries that followed the Soviet army’s withdrawal from Afghanistan and led to the civil wars of the early 1990s. During the presidential election campaign, ex-Taliban commander turned candidate Mullah Rocketi was the only contender to openly admit that ethnic mistrust was the only reason why Afghans so easily became tools in the service of foreign powers and hence carried on fighting. Nation-building has a long way to go in Afghanistan but as economist Paul Collier argues, leaders must build a nation before they can build a state. [continued…]

The Taliban are attempting to exact revenge on Afghan voters and disrupt the ballot count — part of a campaign to exploit the political uncertainty after last week’s presidential election and try to undermine the results.

Since the Aug. 20 election, Taliban fighters have launched nearly a dozen attacks. They have severed the fingers of voters, stolen ballot boxes, and murdered government officials. Afghan police have been reluctant to move into Taliban-controlled areas to quell the violence. [continued…]