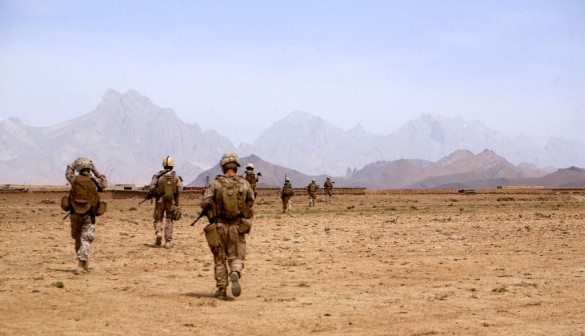 As President Obama prepares to decide whether to send additional troops to Afghanistan, the political climate appears increasingly challenging for him, leaving him in the awkward position of relying on the Republican Party, and not his own, for support.

The simple political narrative of the Afghanistan war — that this was the good war, in which the United States would hunt down the perpetrators of the Sept. 11 attacks — has faded over time, with popular support ebbing, American casualties rising and confidence in the Afghan government declining. In addition, Afghanistan’s disputed election, and the attendant fraud charges that have been lodged against President Hamid Karzai, are contributing further to the erosion of public support.

A CBS News poll released on Tuesday reports that 41 percent of those polled wanted troop levels in Afghanistan decreased, compared with 33 percent in April. Far fewer people — 25 percent — wanted troop levels increased, compared with 39 percent in April. And Mr. Obama’s approval rating for his handling of Afghanistan has dropped eight points since April, to 48 percent. [continued…]

Afghanistan’s volatile presidential election process moved closer to violent confrontation Wednesday, even as officials said releasing the final results from the Aug. 20 polls would be further delayed because of slow vote counting and an even slower effort to investigate hundreds of fraud complaints.

The tension was exacerbated by a suicide bombing outside a mosque in the capital of northeastern Laghman province Wednesday morning. A senior official of the national intelligence service and 23 others were killed; scores were wounded.

Election officials announced Wednesday that President Hamid Karzai, who is seeking reelection, had widened his lead over the main challenger, Abdullah Abdullah, an ophthalmologist and former foreign minister. With about 3.7 million valid votes from 60 percent of polling stations tallied, they said, Karzai leads Abdullah 47.2 to 32.5 percent. [continued…]

Karzai’s election victory seen as inevitable, despite claims of fraud
By Charles Bremner and James Hider, The Times, September 3, 2009

Richard Holbrooke, the US special envoy to the Afghanistan-Pakistan region, dismissed as fantasy the reports that Washington was seeking a run-off against Dr Abdullah. “We have no candidates and no preference as to a first-round victory or a run-off,” Mr Holbrooke said. It was up to the Electoral Complaints Commission to rule on the fraud claims before the final result was proclaimed this month. “The post-election phase, the phase of determining who won, is going to be critical in determining the future of Afghanistan,” he said.

Mr Holbrooke and others among the 27 international envoys played down the likely scope of the irregularities. Many of the 2,500 complaints referred to the same incidents, they said.

“During the process, there will be many claims of irregularities,” Mr Holbrooke said. “That happens in democracies, even when they are not in the middle of a war.”

Bernard Kouchner, the French Foreign Minister, acknowledged concern but said that the election had been a triumph “at a time of serious danger for each of the men and women who dipped their fingers in ink to vote”. [continued…]