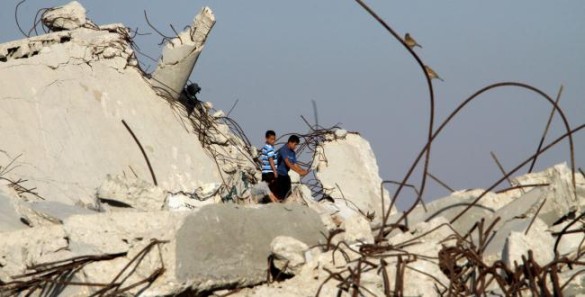 A UN report published Tuesday says poverty in the Gaza Strip has deteriorated to levels unseen since 1967.

The UN trade and development agency says 90% of Gaza’s residents are currently beneath the poverty line and rates the damages caused by the IDF’s Operation Cast Lead at $4 billion, a sum it claims is three times larger than the Strip’s annual market performance.

The agency claims the operation halted all trade in the Gaza Strip, creating a defecit of around $88 million. This, in addition to material damages and loss of finances due to the siege and trade limitations later imposed on the Strip, make up the final sum.

The agency’s report claims the Strip has not been in such dire straits since 1967, and that the government has become the residents’ main force of employment. [continued…]

Not one penny has reached Gaza
By Omar Karmi, The National, August 31, 2009

It has been six months since the international community pledged nearly US$5 billion (Dh18bn) in aid to the Palestinian people, chiefly for the reconstruction of the Gaza Strip after Israel’s devastating offensive there this year.

None of this aid has reached Gaza and no reconstruction has started.

Although Israel is slowly easing its restrictions on the flow of basic humanitarian goods to Gaza, including food and medicine, construction materials remain prohibited from entering, institutions and homes still lie in rubble, and critically needed projects to repair and upgrade Gaza’s power plant and tottering sewage network lie dormant. [continued…]