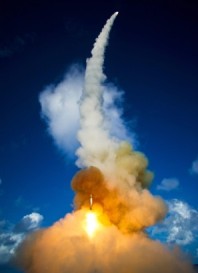 he White House will shelve Bush administration plans to build a missile-defense system in Poland and the Czech Republic, a move likely to cheer Moscow and roil the security debate in Europe.

Pentagon spokesman Geoff Morrell confirmed Thursday that a “major adjustment” is planned and said the decision was made to better protect U.S. forces and allies in Europe from Iranian missile attacks.

The U.S. is basing its move on a determination that Iran’s long-range missile program hasn’t progressed as rapidly as previously estimated, reducing the threat to the continental U.S. and major European capitals, according to current and former U.S. officials. [continued…]

Editor’s Comment — In this instance, missile defense could be described as a technology that might work in the future to meet a threat that might exist in the future. The Obama administration’s decision — if given it’s rosiest interpretation — can be taken to mean that it has much more interest in actual threats than potential threats.

Is this dose of realism going to color its approach to Iran? Possibly. Equally possible is that it is merely concerned with bolstering unity within the P5 plus one before confronting Iran.

“This is a recharacterization of what the threat is and how you respond to the threat,” one official said, explaining that previous designs were geared toward the future threat of Iranian long-range missiles, whereas the Obama team wants to focus on the missiles Iran has now, which are short- and medium-range and can only reach Europe.

In an interview with The Cable, Tauscher herself made that argument and also said she wanted to spend more on existing technologies and less on development of futuristic systems.