The Geneva talks with Iran have been presented as a diplomatic victory and vindication of President Obama’s commitment to engagement. As Juan Cole wrote: “Barack Obama pwned Bush-Cheney in one day, and got more concessions from Iran in 7 1/2 hours than the former administration got in 8 years of saber-rattling.” 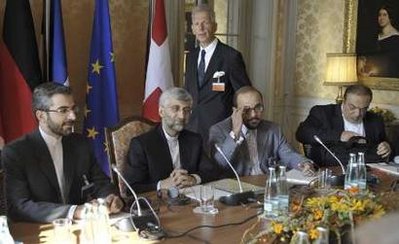 But as many commentators have been quick to describe this as a success for the administration, the role Iran played in making this happen has been largely overlooked.

The breakthrough came during talks on Thursday — or so the narrative runs.

Except, the terms of a key portion of the agreement — a deal for replenishing the fuel supply for a reactor in Tehran that produces medical isotopes — were announced the day before by President Mahmoud Ahmadinejad.

In an interview with Newsweek during his trip to New York to attend the UN General Assembly in late September, Ahmadinejad said:

“We simply don’t have the capacity to enrich at 20 percent for medicinal purposes, of the sort that we have in mind, at this stage. It’s only at 3.5 percent. We had been buying this material in the past, but not from the U.S. government. We can buy it from the United States. It doesn’t really matter who we buy it from, so we are open to it. But this does not affect the fuel cycle. But still, it seems to me a nice opening, a nice window to look through.”

A State Department background briefing given on the day of the Geneva talks confirmed:

“Iran came to the IAEA a few months ago with the request to replace this supply [for the Tehran reactor]. The IAEA consulted us and some others, some other members, and to make a long story short the United States and Russia joined together in a proposal to the IAEA which the IAEA subsequently conveyed as a response to the Iranians, to use Iran’s own LEU stockpile as the basis, as the feedstock for the reactor fuel that’s required.”

The crucial component in this deal was obviously that Iran would provide the feedstock, but as Ahmadinejad made clear on Wednesday, Iran’s decision to do that had already been made before discussions began in Geneva.

Still, the perception remains that the earlier revelations about the Fordo facility outside Qom meant that the Iranians had been diplomatically cornered.

Maybe so. But whether that’s the case may hinge on questions that remain unanswered: How and when did Iran discover that the existence of the facility was no longer secret? For that matter, is it realistic to think that the Iranians would ever have thought that this or any other construction project of such a type could progress without receiving careful and virtually constant scrutiny by America’s ever-watchful eyes in the sky? This after all is the kind of intelligence in which the US retains unparalleled prowess.