Israel dismally fails the requirements of a tolerant pluralistic society, according to a new report from the U.S. State Department.

Despite boasting religious freedom and protection of all holy sites, Israel falls short in tolerance toward minorities, equal treatment of ethnic groups, openness toward various streams within society, and respect for holy and other sites.

The report says that the 1967 law on the protection of holy places refers to all religious groups in the country, including in Jerusalem, but “the government implements regulations only for Jewish sites. Non-Jewish holy sites do not enjoy legal protection under it because the government does not recognize them as official holy sites.” [continued…]

One would think that the bitterness [among Israelis] towards the current president of America has to do with the fears about potential damage to Israel being realized. However, in practice, America’s confused policy brought grimmer results than our failed soccer team, while serving Netanyahu’s vision for four years of slumber at office.

From the very first moment, Israelis sensed the “he’s not one of us” feeling about Obama. Yet even this does not fully explain the acrimony.

It is clear that Obama is not getting on his knees and kissing the ground we walk on, yet even the paranoid Israeli public will find it difficult to present hard evidence that he is persecuting us.

And perhaps this is where the problem lies: It’s not about Obama being against us; rather, it’s the fact that he doesn’t care about us. He’s just indifferent. [continued…] 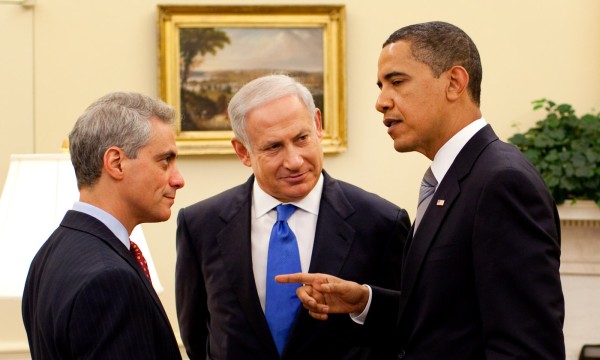 Netanyahu is sure that he knows who is to blame [for strained US-Israeli relations]: White House Chief of Staff Rahm Emanuel. He heard inside information, from the White House, verified information. Emanuel drips venom. My sources may be less good, but the picture they paint is different. Netanyahu’s problem, they say, is not Emanuel. It is Obama.

Netanyahu is convinced that since the first day of his term, Emanuel has been plotting to isolate Israel from America, to shrink it in the eyes of its voters and to destroy it politically. This step failed. Support for Israel in American public opinion has only increased. It’s not Israel that is isolated in America, but rather the Palestinians. Personal admiration for him also increased. It increased in wake of his speech at the UN General Assembly. There are no other leaders in the world today that speak to Americans in their own language. They’ve known him in America for 30 years now. [continued…]

The announcement that Mahmoud Abbas has decided not to stand for re-election as head of the Palestinian Authority should come as a relief to all Palestinians. In fact, Abbas’s departure will open a much-needed opportunity to take stock of where things stand and assess the future course of the Palestinian struggle.

Never an appealing or charismatic figure, Abbas has been losing popular support since his first day in office five years ago (his term technically expired in January 2009). Since the 1993 Oslo Accords, in which he played a prominent role, the official Palestinian leadership has been pursuing a formula for peace — the two-state solution — that has yielded nothing more than the intensification of the Israeli occupation of Palestinian territory. Those 16 years have been characterized by the further immobilization and immiseration of the Palestinian people, and an ever-growing list of civilian casualties, most recently in Gaza.

We are left with no other conclusion than this: that the so-called peace process with which Abbas has been indelibly associated, albeit as the Israelis’ junior assistant, was calculated to produce exactly these results. The very first step of the Oslo process, undertaken with Abbas’s assent in 1993, was to fragment and separate the occupied territories into shards of land, disconnected from each other and from the outside world, under total, institutionalized Israeli domination. Take one look at a map and you can’t miss the separation of Gaza from the West Bank and East Jerusalem, and the further internal splintering of the West Bank, all of which is the direct result of Oslo. [continued…]