Once more, kind hosts among the Palestinian community in Amman provided food and hotel accommodation for us, as well as a full programme of rallies and press conferences. Many of our hosts invited volunteers to their houses, where they enjoyed home-cooked food and convivial company.

By now, the convoy had become a major news story (in some cases the lead story) across the Middle East. The Turkish president even appeared on Syrian TV asking Egypt to facilitate its smooth passage.

Sadly, however, this appeal seems to have fallen on deaf ears. Despite Viva Palestina’s organisers spending months trying to coordinate and cooperate with the Egyptian authorities regarding the convoy’s passage from the Red Sea to Rafah (only half a day’s drive), at the last minute, the Egyptian consulate in Aqaba announced that all aid for Gaza must either be handed over to UNWRA, travel through Israel, or be approved by Israel (!) before coming to Rafah, and that therefore we would not be allowed to land at Nuweiba.

In a meeting with the convoy volunteers on Christmas morning, George Galloway pointed out that if we thought UNWRA was up to the job, we could have simply written them a cheque months ago! He also reiterated that we had no intention of asking Israel for its permission to deliver aid to a sovereign people via a third, also sovereign, country. He begged the Egypian authorities to change their minds, emphasising that on Sunday 27 December, the anniversary of the bombardment of Gaza, the world’s attention should be on Israel and its war crimes, not on Egypt, a fellow Arab nation. [continued…]

What would Jesus do in Gaza?
By Christopher Dickey, Newsweek, December 24, 2009

Maybe it seems beside the point, even on the eve of Christmas, to ask ourselves what would Jesus do in the Holy Land today. The narrow confines of Gaza, Jerusalem, Judea, and Samaria are places where God’s love was long ago supplanted by war for land and ill will among men. It has been a year now since the bloody and fruitless Israeli effort to crush Hamas in what amounts to a massive prison for a million people. Peacemakers in the Middle East are rarely blessed, and often reviled; just ask special envoy George Mitchell. And the truth rarely sets anyone free, as proved most recently by the fact-filled United Nations report by South African Judge Richard Goldstone, which was dissed by Washington and dismissed by Israel.

But given that it’s Barack Obama who’s president of the United States, the Jesus question has a relevance today it wouldn’t have had even a year ago. No, Obama is not the messiah. I’m not saying that. But Obama actually uses the word love in a way that Jesus would have understood. So while the question of what Christ might do in today’s Holy Land is hypothetical, the question of what Obama will do is not. And some of his most cherished ideas about peace, love, and understanding could be put to the test Dec. 31 when activists are hoping to stage a massive Gaza Freedom March. [continued…]

We, representing 1,362 individuals from 43 countries arriving in Cairo to participate in the Gaza Freedom March, are pleading to the Egyptians and your reputation for hospitality.

We are peacemakers. We have not come to Egypt to create trouble or cause conflict. On the contrary. We have come because we believe that all people — including the Palestinians of Gaza — should have access to the resources they need to live in dignity. We have gathered in Egypt because we believed that you would welcome and support our noble goal and help us reach Gaza through your land.

As individuals who believe in justice and human rights, we have spent our hard-earned, and sometimes scarce, resources to buy plane tickets, book hotel rooms and secure transportation only to stand in solidarity with the Palestinians of Gaza living under a crushing Israeli blockade.

We are doctors, lawyers, students, academics, poets and musicians. We are young and old. We are Muslims, Christians, Jews, Buddhists and secular. We represent civil society groups in many countries who coordinated this large project with the civil society in Gaza. [continued…]

What is the aim of the Gaza Freedom March?
By Bianca Zammit, Palestine Chronicle (via ISM), December 23, 2009

As the days of December 2009 draw in, two events which each have a role to play in world peace draw closer. The first is on the 27th and is commemorating the start of the 22 day attacks on Gaza, an operation which targeted unarmed civilians, schools, hospitals, journalists and emergency staff. The second, The Gaza Freedom March will take place on the 31st. The Gaza Freedom March is a historic moment, the magnitude of which has not been seen in Palestine since 1967. Chiseled on the lessons learnt from South Africa’ struggle for liberation against apartheid and from Gandhi’ Satyagraha approach during the campaign for India’ independence, the Gaza Freedom March is walking in the same shoes.

In order to find out more about the Gaza Freedom March I met up with Dr. Haidar Eid, a member of the Steering Committee for the March in Gaza. [continued…]

Only 2 days to go before our attempt at trending #GAZA on twitter to raise global awareness on commemorating one year since the massive Israeli assault and siege. You can read the initial post here. Here are some updates and instructions I thought would be useful for all of us involved in the campaign:

How does a topic trend on twitter and why is that important?

At every given time, twitter lists a number of “trending,” i.e. popular topics being discussed frequently by a large number of people. These topics get a lot of needed attention – especially if we know they are otherwise going to be ignored by mainstream mass media. With all the odds against the Gaza Freedom March and Viva Palestina, we need to make sure that we are reporting the news of what’s happening with their campaigns, as well as reminding the world of the one-year commemoration. Topics trend on twitter when a large number of people mention it frequently over a substantial period of time. It also depends on the percentage of tweets, the hour, how active the twit-o-sphere is, etc. Based on a little research I did today, here’s how we can get it done: [continued…]

Inside Story – The world has failed Gaza
Inside Story, Al Jazeera, December 23, 2009

‘They planted hatred in our hearts’
By Patrick Cockburn, New York Times, December 27, 2009 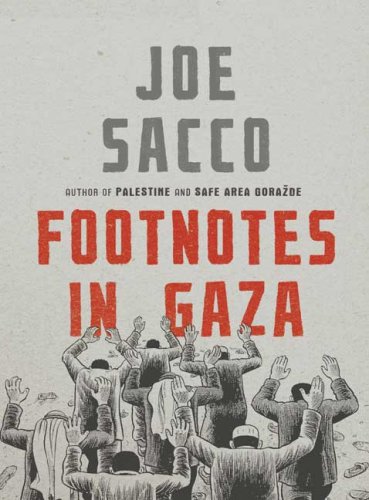 oe Sacco’s gripping, important book about two long-forgotten mass killings of Palestinians in Gaza stands out as one of the few contemporary works on the Israeli-Palestinian struggle likely to outlive the era in which they were written.

Sacco will find readers for “Footnotes in Gaza” far into the future because of the unique format and style of his comic-book narrative. He stands alone as a reporter-cartoonist because his ability to tell a story through his art is combined with investigative reporting of the highest quality.

His subject in this case is two massacres that happened more than half a century ago, stirred up little international attention and were forgotten outside the immediate circle of the victims. The killings took place during the Suez crisis of 1956, when the Israeli Army swept into the Gaza Strip, the great majority of whose inhabitants were Palestinian refugees. According to figures from the United Nations, 275 Palestinians were killed in the town of Khan Younis at the southern end of the strip on Nov. 3, and 111 died in Rafah, a few miles away on the Egyptian border, during a Nov. 12 operation by Israeli troops. Israel insisted that the Palestinians were killed when Israeli forces were still facing armed resistance. The Palestinians said all resistance had ceased by then. [continued…]