YEAR IN REVIEW: Israel (and a world that looks the other way) is in the grip of a moral paralysis
By Paul Woodward, War in Context, January 8, 2009 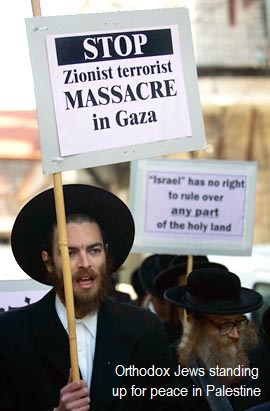 e had no choice,” has become Israel’s national mantra.

But to say “we had no choice,” is to say our actions are not the fruit of our intentions. We are now the instrument of the will of others. Hamas made us do this.

There would be more moral clarity in simply declaring that Israel is a mighty power that has no compunction about the effects of its ruthless efforts to crush its enemies.

Instead, Israel wants to have it both ways: to demonstrate its might even while portraying itself as a helpless victim.

From Avi Shlaim we learn that this moral two-step actually has a name in Hebrew: bokhim ve-yorim. It means “crying and shooting.”

As always, mighty Israel claims to be the victim of Palestinian aggression but the sheer asymmetry of power between the two sides leaves little room for doubt as to who is the real victim. This is indeed a conflict between David and Goliath but the Biblical image has been inverted – a small and defenceless Palestinian David faces a heavily armed, merciless and overbearing Israeli Goliath. The resort to brute military force is accompanied, as always, by the shrill rhetoric of victimhood and a farrago of self-pity overlaid with self-righteousness. In Hebrew this is known as the syndrome of bokhim ve-yorim, “crying and shooting”.

In one of the latest examples of Israel’s abnigation of responsibility for its own actions, we learn that several children have spent the last few days starving as they huddle next to the bodies of their dead mothers. The Washington Post reports:

The International Committee of the Red Cross said Thursday that it had found at least 15 bodies and several children — emaciated but alive — in a row of shattered houses in the Gaza Strip and accused the Israeli military of preventing ambulances from reaching the site for four days.

Red Cross officials said rescue crews had received specific reports of casualties in the houses and had been trying since Saturday to send ambulances to the area, located in Zaytoun, a neighborhood south of Gaza City. They said the Israeli military did not grant permission until Wednesday afternoon.

In an unusual public statement issued by its Geneva headquarters, the Red Cross called the episode “unacceptable” and said the Israeli military had “failed to meet its obligation under international humanitarian law to care for and evacuate the wounded.”

When rescue workers from the Red Cross and the Palestinian Red Crescent arrived at the site, they found 12 corpses lying on mattresses in one home, along with four young children lying next to their dead mothers, the Red Cross said. The children were too weak to stand and were rushed to a hospital, the agency said.

This is what happens when a military force, its commanders, its government and the population cheering on this war believes that it has “no choice.”

This is the twilight zone of moral paralysis in which evil takes on the disguise of “necessity.”