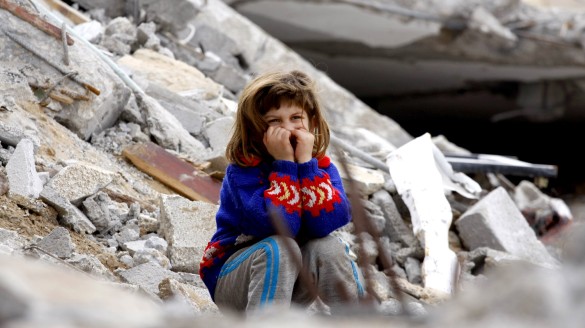 A United Nations fact-finding mission investigating the three-week war in Gaza issued a lengthy, scathing report [PDF] on Tuesday that concluded that both the Israeli military and Palestinian armed groups “committed actions amounting to war crimes,” and possibly crimes against humanity.

The four-member mission, led by Justice Richard Goldstone, a widely respected South African judge, also concluded that neither Israel nor the Palestinian groups had carried out any “credible investigations” into the alleged violations. If that did not change within six months, the United Nations Security Council should refer the situation to the International Criminal Court in the Hague for possible prosecution, the panel concluded.

“The prolonged situation of impunity has created a justice crisis in the Occupied Palestinian Territory that warrants action,” the members said in their 574-page report on the war, during which some 1,200 Palestinians were killed, including at least several hundred civilians, and 13 Israelis died, 10 soldiers and 3 civilians. [continued…]

Editor’s Comment — Perhaps the report’s most disturbing finding says less about the past than it portends for Gaza and Israel’s future:

Some 30 per cent of children screened at UNRWA schools had mental health problems, while some 10 per cent of children had lost relatives or friends or lost their homes and possessions. WHO estimated that some 30,000 children would need continued psychological support and warned of the potential for many to grow up with aggressive attitudes and hatred.

Judge Goldstone and the pollution of argument
By Antony Lerman, The Guardian, September 15, 2009

The despicable attacks on human rights organisations investigating Israel’s Gaza offensive in January confirm Churchill’s observation: “A lie gets halfway around the world before the truth has a chance to get its pants on.” The mission led by the South African judge Richard Goldstone to investigate international human rights and international humanitarian law violations during Israel’s offensive, established by the UN Human Rights Council (UNHRC), is the latest victim. His findings are about to be made public. The knives have been out for the mission for months. Now they are being plunged into him and his colleagues. Until the report is out Goldstone can’t defend it. So the smears and misrepresentation are left free to pollute public discourse.

The New York-based Human Rights Watch (HRW) has assiduously responded to a deluge of scurrilous attacks on its credibility and staff, yet totally unfounded allegations – for example, about accepting Saudi government funding and failing to give a critical report to the Israel Defence Forces before releasing it to the public – are constantly being recycled. HRW messed up by failing to see that the nerdy and, to most people, disturbing hobby of its weapons expert Marc Garlasco (he collects German and American second world war memorabilia) could be used to discredit his role as author of highly critical reports of Israel’s military conduct in Gaza. But when this story broke last week, the equation implied in some allegations – “Nazi” object-collector plus “Israel-basher” equals “antisemite” – was baseless and defamatory. That he also worked on reports critical of Hamas and Hezbollah was ignored. As another excuse to attack HRW, and deflect attention from its reports’ findings, the Garlasco affair was a gift.

The human rights world is not beyond reproach. UNHRC has hardly been impartial on Israel. Goldstone accepted his role only after the council president agreed to the alteration of the mission’s mandate to cover all parties to the conflict, not just Israel. But mistrust alone does not explain the extraordinary scale of the attacks on human rights organisations, including all Israeli ones, for their reports on Israel. [continued…]