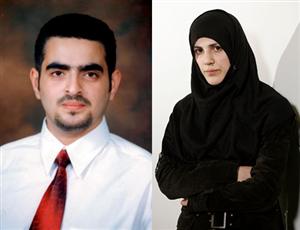 oft-spoken and composed, but unmistakably angry, the wife of the suicide bomber who killed himself and seven employees of the CIA in Afghanistan on Dec. 30 says flatly, “My husband was anti-American; so am I.” About that, there are no regrets. In an exclusive interview Thursday, Defne Bayrak, 31, spent more than an hour at the offices of Newsweek Türkiye in Istanbul talking about her husband, Dr. Humam Khalil Abu-Mulal al-Balawi; his beliefs; what he may have been offered by the CIA to work as a double agent on the trail of Al Qaeda’s top leadership; and what she heard from those apostles of jihad who ultimately inspired him to kill and die.

Al-Balawi’s case is a study in the radicalization of someone who is well-educated, economically well-off, devout, and disciplined. Such people may not fit into the public’s stereotypical idea of a terrorist, but the profile is increasingly familiar to police and intelligence officers involved with counterterrorism. Many of Al Qaeda’s most successful attacks, from 9/11 to the London transit-system bombings in 2005, were directed and executed by such intelligent, articulate, religious, and suicidally violent men. [continued…]

Professionally, one has to admire the skill of suicide bomber Humam Khalil Abu-Mulal al-Balawi’s handlers. This operation could well have been months — if not longer — in the making, and neither the Jordanian intelligence service (GID), which supplied the double agent to the CIA, nor Langley apparently had any serious suspicion that al-Balawi still had the soul and will of a jihadist.

That is an impressive feat. The Hashemite monarchy imprisons lots of Islamic militants, and the GID has the responsibility to interrogate them. The dead Jordanian official, Sharif Ali bin Zeid, reportedly a member of the royal family, may not have been a down-and-dirty case officer with considerable hands-on contact with militants, but al-Balawi surely passed through some kind of intensive screening process with the GID. Yet the GID and the CIA got played, and al Qaeda has revealed that it is capable of running sophisticated clandestine operations with sustained deception.

When asked if she could confirm what other sources had told Newsweek — that Balawi was offered as much as $500,000 by the CIA and $100,000 by the Jordanians to track down al Qaeda’s leadership — Balawi’s wife said only, “It might be true.”

In both these instances — Gerecht’s admiration of al Qaeda’s tradecraft and the likelihood that the CIA believed Balawi could be turned for the right price — the crucial asymmetry between the CIA and its adversary is left unstated: the disparity in the strength of each side’s convictions. On one side are individuals who have transcended their own fear of death, and on the other side individuals whose concerns are unfocused and defuse – a swirl of patriotism, egotism, and ambition.

A former senior CIA officer while explaining what might have drawn so many operatives into Balawi’s trap, told the New York Times: “Everyone would have wanted to be on the team that caught Zawahri. That’s the kind of thing that makes careers.”

Setting aside questions about whose outlook might be more delusional and whether either has a moral footing, the jihadist’s fearlessness and conviction is a force that neither soldier nor spy can truly match.

Pakistan warned US senators Thursday that American drone attacks against militants on its territory undermined “the national consensus” that supported the war against militancy.

President Asif Ali Zardari made the warning to a US delegation led by former US presidential candidate and Republican Senator John McCain one day after US missile attacks killed at least 13 militants on the Afghan border.

McCain said Thursday in Kabul, the capital of neighbouring Afghanistan, that the use of such drone strikes against suspected Islamist militants in Pakistan was an effective part of US strategy and should continue. [continued…]