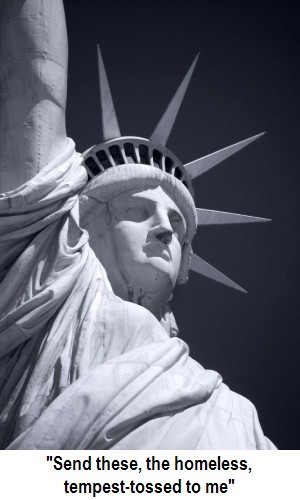 merica has a message for the millions of Haitians left homeless and destitute by last week’s earthquake: Do not try to come to the United States.

“Listen, don’t rush on boats to leave the country,” Mr. Joseph says in Creole, according to a transcript released by the Pentagon. “If you do that, we’ll all have even worse problems. Because, I’ll be honest with you: If you think you will reach the U.S. and all the doors will be wide open to you, that’s not at all the case. And they will intercept you right on the water and send you back home where you came from.”

Homeland Security and Defense Department officials say they are taking a hard line to avert a mass exodus from the island that could lead to deaths at sea or a refugee crisis in South Florida. Haiti’s capital, Port-au-Prince, is about 700 miles from Miami.

So far, there has been no sign of Haitians trying to flee the island by boat, United States officials say. Nor has there been a mass exodus of Haitians into the neighboring Dominican Republic, except for about 3,000 injured people who are being treated at hospitals just over the Dominican border, officials there say.

But United States officials say they worry that in the coming weeks, worsening conditions in Haiti could spur an exodus. They have not only started a campaign to persuade Haitians to stay put, but they are also laying plans to scoop up any boats carrying illegal immigrants and send them to Guantánamo Bay, Cuba.

The State Department has also been denying many seriously injured people in Port-au-Prince visas to be transferred to Miami for surgery and treatment, said Dr. William O’Neill, the dean of the Miller School of Medicine at the University of Miami, which has erected a field hospital near the airport there.

“It’s beyond insane,” Dr. O’Neill said Saturday, having just returned to Miami from Haiti. “It’s bureaucracy at its worse.” [continued…]

Wharf Jérémie on this city’s edge was all chaos and destruction on Monday, with upturned shipping containers lying in the sea and pigs foraging on piles of refuse. But for a thousand or more seeking a ride on rickety boats away from the ruined capital, the wharf was a means to something hopeful: escape.

“Our home is destroyed,” said Yanique Verly, 33, who sells vegetables on the street. She waited for a boat to take her and her three children to her home on Haiti’s western coast. “My only hope is to return to my family’s arms.”

Ms. Verly joined thousands of others, as the exodus from the capital accelerated on Monday, by boat, bus, car and truck, in uncertain quest for shelter, fresh water and stability in the countryside. They sought to leave an anarchic city marked by acute shortages of basic goods and aid efforts hampered by bottlenecks and security fears. [continued…]