Turkey: Newly exposed military coup planned to turn the clock back to 1923 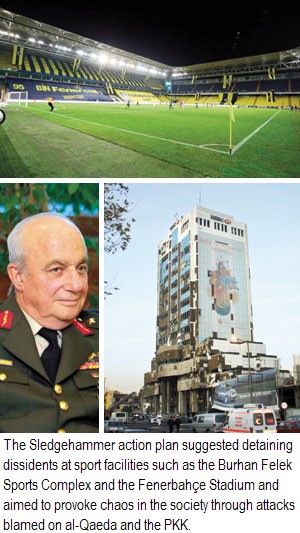 The Turkish Armed Forces (TSK) hoped to take Turkey back to 1923, the time when the republic was proclaimed, after the staging of a coup d’état against the Justice and Development Party (AK Party) government, the Taraf daily reported on Thursday.

According to the coup plan — titled the Balyoz (Sledgehammer) Security Operation Plan — all the key posts in the country, public and private, would be occupied by active and retired members of the military to “get rid of every single threat to the secular order of the state.”

“The plan will be based on an objective to clean up all state and public posts [of individuals suspected of posing a threat to the secular order of Turkey] and return Turkey to its dynamism of 1923. All the assets and financial resources of individuals and groups suspected of involvement in acts of reactionaryism will be confiscated, and necessary steps will be taken to freeze their financial resources abroad,” stated the document.

The armed forces also planned to take into custody and then arrest at least 200,000 individuals accused of reactionary activities in İstanbul after the coup. The total number of detainees around Turkey was estimated to reach 16 million, the plan stated. According to the document, individuals who stood against the coup would be taken into custody and brought to large sports facilities for interrogation. Among those facilities were the Burhan Felek sports complex and Fenerbahçe Stadium. The suspects would be questioned by security forces there and then would be sent to prisons. If the prisons were unable to accommodate all the arrestees, then military barracks would temporarily be turned into jails. [continued…]

It was not clear if Friday’s raids in 16 provinces in this NATO member and western ally country would amount to a major blow to homegrown Islamic militants.

Yeni Safak newspaper this week reported that Turkish police had recently seized video recordings of alleged Turkish al-Qaida militants in Taliban camps in Afghanistan, as well as alleged plans for attacks on Turkish soldiers in Kabul and on police in Turkey. It did not cite a source for the report. [continued…]