When Amos Radian, Israel’s Dominican Republic-based ambassador to the nations of the eastern Caribbean, spoke to the Jerusalem Post last week, he was unequivocal in expressing appreciation towards the Bigio family. 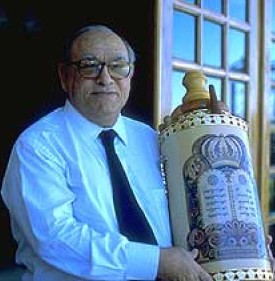 Gilbert Bigio, a Syrian Jew and honorary consul for Israel in Haiti also happens to be among the wealthiest men in that impoverished nation. The day before Israel’s relief team was due to arrive in Haiti, Ambassador Radian spoke to Reuven Shalom Bigio, son of the business magnate.

“Tomorrow the Israel Air Force is coming with two jets and 250 people and I have no place to put them,” Radian told Bigio. The response was swift as the Israelis were provided with Bigio-owned land to set up a field hospital. Radian said that the assistance provided “made us look so good”.

The billionaire industrialist’s loyalty to Israel is unquestionable. As the Jerusalem Post report said:

Gilbert Bigio’s own father came to Haiti in 1925 and was active in the Jewish community. He played a role in Haiti’s support for Israeli statehood in the November 1947 vote at the United Nations.

“Being in a city where there’s no synagogue, prayers are done at our house, Israel to us is the motherland. It’s the rock. It’s how we identify ourselves,” said Reuven Bigio. His father’s support for Israel’s mission here was immediate: “His desire to help was unconditional.”

Does the Bigio family have an unconditional desire to help Haitians? Not as far as one can tell.

In 2004, the Miami Herald reported on Haiti’s tiny and wealthy Jewish community and spoke to its de facto leader. Bigio saw no reason why the huge disparity between his own wealth and the poverty of those around him should breed in them any resentment.

Bigio, 68, lives in a big, beautiful house in Petionville, one of the few upscale neighborhoods in Port-au-Prince. Behind the well-guarded house is a luxurious swimming pool and a gazebo for outdoor parties.

Like most of the other Jews who remain in Haiti, Bigio is considered extremely wealthy in a country where 50 percent of the population is illiterate and 76 percent of children under 5 are underweight or suffer from stunted growth.

“I don’t think there’s resentment against people who are rich here,” says the retired businessman, who speaks English, French and Haitian Creole. “If you know how to manage success, people admire you instead of hate you.”

Cite Soleil, a seaside shantytown of more than 300,000 people residing in homes made of cinder blocks with tin roofs, has been described as poorer than India’s infamous slums of Calcutta. It is also the home of the Bigio business empire.

“Our purpose is to improve the quality of life of the communities we reach,” the GB Group says in its mission statement. A Haiti Information Project report from Cite Soleil published in January 2008 suggests otherwise.

While the surrounding residents of Cite Soleil are forced to literally eat dirt to stave off hunger, Bigio is a billionaire whose family supported the first coup against Aristide and reportedly helped to back the movement that forced his second ouster in 2004.

One need not look very far to see where Gilbert Bigio’s interests lie in relation to Cite Soleil. According to his own company’s web site his family maintains controlling interests in sixteen of Haiti’s largest companies. They are also the largest Haitian partner in the wireless communications giant Digicel, a mammoth company based in Ireland that has nearly cornered the cellular market in the Caribbean. Bigio’s family is not merely wealthy amidst a sea of poverty stricken residents in Haiti, his family represents the Über-wealthy who have benefited most since Aristide’s second ouster in 2004.

The Office of Foreign Assets Control of the US government blocked all of the Bigio family’s holdings in US banks following the brutal military coup against Aristide in 1991. Since Aristide’s second ousting in 2004, the financial wealth of the Bigio family along with those of other well off Haitian clans such as the Mevs, Brandts, Acras and Madsens have nearly doubled according to a confidential source at a private accounting firm.

Meanwhile, Israel’s image-boosting relief effort in Haiti is about to wrap up its operations – its medical and rescue team is set to return home by Thursday.