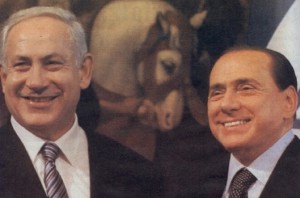 As one pompous ass said to another on Monday: “I can think of few peoples who have contributed more to Western civilization than our two peoples. In both Rome and in Jerusalem, the foundations of Western culture were laid.”

Italian Prime Minister Silvio Berlusconi, at the beginning of a three-day tour of Israel, responded to this self-flattering compliment from Israel’s Prime Minister Benjamin Netanyahu by saying: “We are here to show our recognition and our pride in the fact that we are part of a Judeo-Christian culture that is the basis for European culture.”

Many Israelis might express political contempt for Europe — a reputed well-pool of rising anti-Semitism — yet they still cling to European culture. To be told by a European, as an Israeli diplomat recently was, “we have nothing in common with you,” cuts right to the bone. Without its cherished European and Western identity, Israel has nothing.

This doesn’t say much about European virtues, yet the fact that with increasing frequency prominent Israelis struggle to maintain even a superficially civil bearing, is pushing them outside Europe’s cultural embrace. Israelis are becoming the new barbarians.

In a speech at a conference not long ago, an Israeli diplomat serving in a European capital touted Israel’s hoary PR line, distinguishing between “the only democracy in the Middle East” and its autocratic Arab neighbors. “We share common values,” the Israeli told the Europeans. To his surprise, a member of the audience stood up and replied to him: “What common values? We have nothing in common with you.”

In diplomatic conversations, Europeans are critical of Israel because of the Gaza blockade, the construction in the Jewish settlements, the home demolitions in East Jerusalem, the pervasive loathing of the right-wing government and even the social gaps and the way Israel is moving away from the European welfare-state model.

The Netanyahu-Lieberman government is nearly always described as “hard-line” in the foreign media. This is not entirely fair: The government of Ehud Olmert and Tzipi Livni went to war in Lebanon and Gaza and built thousands of apartments for Jews in East Jerusalem and the West Bank settlement blocs – many more than did Netanyahu, who has refrained from employing military force and has declared a 10-month freeze on settlement construction. But they liked the Kadima government because Olmert and Livni made the right noises about their desire for peace and a final status agreement, whereas they don’t believe Netanyahu when he talks about “two states for two peoples.” The fact that Olmert and Livni achieved nothing in the negotiations makes no difference. It’s the intentions that count.

Netanyahu and his aides have answers to the accusations against Israel. The blame for the Gaza blockade lies squarely with the Palestinians, who chose Hamas to reign over them and kidnapped soldier Gilad Shalit. “You are worrying about the humanitarian rights of 1.5 million Palestinians in Gaza. You should be worrying about one Israeli who is being held there,” Netanyahu’s people tell UN representatives.

In East Jerusalem, the government is hiding behind Mayor Nir Barkat and the planning and construction institutions, which are approving building plans for Jews and home demolitions for Palestinians. And for the diplomatic stagnation, it is blaming Palestinian Authority President Mahmoud Abbas, who is refusing to renew the talks.

There is one little problem: The world isn’t buying Israel’s explanations and it isn’t prepared to condemn Palestinian obduracy.

Political scientists Shaul Mishal and Doron Mazza warn of a “white intifada” — apparently they didn’t notice: the West isn’t white anymore — but even if their warning is misnamed, their fear is not misplaced.