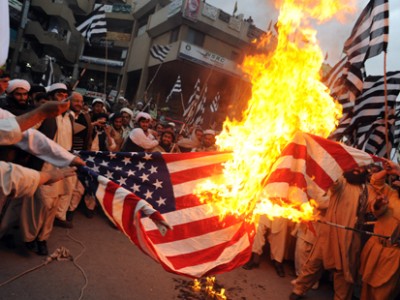 It should go without saying but yet again needs to be repeated: in an effective justice system, justice not only must be done but it must be seen to be done. In this respect the trial of Dr Aafia Siddiqui, which ended in New York on Wednesday was a miserable failure.

Although most Americans haven’t even heard the name of this MIT-trained neuroscientist, Dr Siddiqui’s case has captured the attention of much of her native Pakistan. Her conviction on two counts of attempted murder quickly led Pakistan’s President Asif Ali Zardari to direct his government to offer her legal assistance. 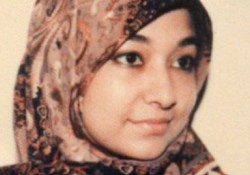 Pakistanis shouted anti-American slogans and burned the Stars and Stripes on Thursday in protest of a New York jury’s conviction of a Pakistani woman accused of trying to kill Americans while detained in Afghanistan.

The protests drew thousands in at least four cities, demonstrating the widespread distrust, and even hatred, of the U.S. in this country whose cooperation Washington needs to stabilize neighboring Afghanistan.

Defense lawyers argued that an absence of bullets, casings or residue from the M4 [– the rifle allegedly snatched and fired by the accused –] suggested it had not been shot. They used a video to show that two holes in a wall supposedly caused by the M4 had been there before July 18 [the date of the alleged crime].

They also pointed out inconsistencies in the testimony from the nine government witnesses, who at times gave conflicting accounts of how many people were in the room, where they were sitting or standing and how many shots were fired.

Ms. Siddiqui’s lawyers said they had not decided whether to appeal. They suggested that prosecutors had played to New Yorkers’ anxieties about terror attacks.

“This is not a just and right verdict,” Elaine Sharp, one of Ms. Siddiqui’s lawyers, said outside the courtroom. “In my opinion this was based on fear but not fact.”

If the views of jurors were shaped by irrational fears, it seems as though Judge Richard M. Berman suffered the same frailty. Far from recognizing that the conduct of the trial had wider implications for the relations between the US and Pakistan, so-called security considerations meant that journalists with the least interest in covering the case had the best access while those with the greatest interest weren’t allowed into the court room.

As Petra Bartosiewicz reported for Time magazine early in the proceedings:

[Dr Siddiqui’s] case has been major news in much of the Muslim world — and a crush of journalists from Pakistan have been struggling to gain access to a trial hemmed in by security-conscious New York City officials. How the foreign press is able to follow the court proceedings — and thus perceive the fairness of the trial — will have an impact on upcoming high-profile terrorism trials like that of Khalid Sheikh Mohammed and four other suspected 9/11 plotters, likely to be held in the same courthouse as the Siddiqui case.

“If we were able to file a transcript of the proceedings they’d probably print it,” Iftikhar Ali, a reporter with the Associated Press of Pakistan, said of the Siddiqui trial. “That’s how much interest there is in this case.” But Ali, like many other reporters from overseas, has been hampered in gaining access to the live proceedings. Journalists from Pakistan on assigment in New York have been largely excluded from the courtroom. Because of tight restrictions observed by the presiding Judge Richard Berman, not a single Pakistani reporter had been granted a press credential when opening statements began on Tuesday. They were instead sent to an overflow courtroom to watch the proceedings via video link.

In the overflow room this week I met journalists from Pakistan with United Nations and U.S. State Department issued press credentials. They work for some of the biggest outlets in their countries, including BBC Urdu, the Associated Press in Pakistan, Jang, Dawn, Geo and Haj TV. None were issued credentials for the trial, though some had applied weeks ago. We watched the proceedings on a flat screen television. The view didn’t include any of the exhibits being offered into evidence, among them multiple diagrams of the scene of the shooting and incriminating documents allegedly written by Siddiqui. At one point a key government eyewitness stepped off the witness stand and out of range of both the camera and microphone to use a visual aid to demonstrate where he was during the shooting. He was permitted to give much of his testimony off camera.

Ali, who has been at the court every day of the trial — including jury selection — was granted access to the main courtroom for about five minutes on the first day, but was escorted out when court security guards realized he was not on the list of approved media. At the time the only other occupants of the four-row press box, which covers half the available seating in the courtroom with room for about 20 individuals, were one each from the The New York Times, The New York Post and the New York Daily News. The court has officially recognized only media who carry New York Police Department issued press passes, traditionally reserved for reporters who regularly cover crime scenes and certain public events in the city. Out of the approximately 30 such individuals from U.S. news outlets who were eligible to attend the trial, most were not present for opening statements.

“We’ve been coming to all the pretrial hearings and we were never told there was going to be a different system for the trial. We were told the press will be allowed,” Ayesha Tanzeem, a journalist with Voice of America Urdu said. After TIME made inquiries on Thursday, individuals in the overflow room, including the Pakistani journalists, were for the first time ushered into the main courtroom during the afternoon session. But with the exception of a BBC Urdu reporter and a Samaa TV reporter who received official passes, none have been granted a press credential that would guarantee them a seat on future days.

The decision to accept solely the NYPD pass for the Siddiqui trial came from the judge’s chambers, says Elly Harrold of the District Executive’s office, the administrative arm at the federal courthouse. “Of course there are exceptions,” Harrold said, “but I’m not at liberty to discuss that.”

Although Siddiqui is not charged with any terrorism-related crime, security concerns are paramount though the procedures seem to be unevenly enforced. During the lunch break on the first day of the Siddiqui trial a group of Muslim men praying in the waiting areas outside the courtroom were afterwards asked to leave the floor. That prevented them from securing a place in line for the afternoon session. Several Muslim women in hijabs were also given similar instructions, but others in the same area, dressed in business attire, including this reporter, were permitted to stay. On the second day of the trial metal detectors were posted outside the courtroom and individuals were asked for photo identification and their names and addresses were logged by court security officers. At the close of proceedings on Thursday defense attorney Charles Swift protested the practice. “The suggestion is that the gallery may be a threat,” said Swift, calling the measure “highly prejudicial.”

1 thought on “The Siddiqui conviction: A verdict ‘based on fear, not on fact’”