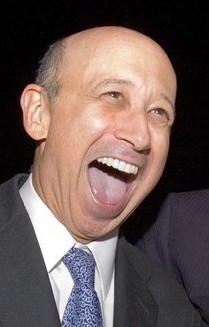 The president, speaking in an interview, said in response to a question that while $17 million is “an extraordinary amount of money” for Main Street, “there are some baseball players who are making more than that and don’t get to the World Series either, so I’m shocked by that as well.”

“I know both those guys; they are very savvy businessmen,” Obama said in the interview yesterday in the Oval Office with Bloomberg BusinessWeek, which will appear on newsstands Friday. “I, like most of the American people, don’t begrudge people success or wealth. That is part of the free- market system.”

Does the president truly not understand that Dimon and Blankfein run banks that are regarded by policymakers and hence by credit markets as “too big to fail”?

This is the antithesis of a free-market system.

True. But there’s a crucial cultural dimension to what Obama is saying.

The love of money and the celebration of the accumulation of personal wealth are core American values. To criticize the wealthy is to take a stance that is widely seen as un-American. Indeed, the widely-held assumption is that the only plausible motive anyone might have for denouncing the rich is envy. And to be tarred with the slur “envious” is to be cast into a social margin occupied by that most pathetic type of American: the loser.

So, if you want to stay on the side of the winners, you say: Mr Blankfein, you just snatched a cool $9 million. Good for you!

Meanwhile, those of us who are not burdened with the vanity of the president or the fear of being called un-American, can name Blankfein’s reward what it is: theft.

And just in case anyone might be in any doubt whether Goldman Sachs is run by crooks, consider the fact that the current debt crisis in Greece — which has sent shock-waves through the global economy — was brought about in large part because Goldman Sachs created a mechanism through which the Greek government has for most of the last decade been able to conceal its debt.

Goldman Sachs helped the Greek government to mask the true extent of its deficit with the help of a derivatives deal that legally circumvented the EU Maastricht deficit rules. At some point the so-called cross currency swaps will mature, and swell the country’s already bloated deficit.

Greeks aren’t very welcome in the Rue Alphones Weicker in Luxembourg. It’s home to Eurostat, the European Union’s statistical office. The number crunchers there are deeply annoyed with Athens. Investigative reports state that important data “cannot be confirmed” or has been requested but “not received.”

The Greeks have never managed to stick to the 60 percent debt limit, and they only adhered to the three percent deficit ceiling with the help of blatant balance sheet cosmetics. One time, gigantic military expenditures were left out, and another time billions in hospital debt. After recalculating the figures, the experts at Eurostat consistently came up with the same results: In truth, the deficit each year has been far greater than the three percent limit. In 2009, it exploded to over 12 percent.

Now, though, it looks like the Greek figure jugglers have been even more brazen than was previously thought. “Around 2002 in particular, various investment banks offered complex financial products with which governments could push part of their liabilities into the future,” one insider recalled, adding that Mediterranean countries had snapped up such products.

Greece’s debt managers agreed a huge deal with the savvy bankers of US investment bank Goldman Sachs at the start of 2002. The deal involved so-called cross-currency swaps in which government debt issued in dollars and yen was swapped for euro debt for a certain period — to be exchanged back into the original currencies at a later date.