Scott Horton takes on the neocon campaign against a group of lawyers, now working for the Obama Administration, who “voluntarily represented terrorists.”

…the incompetent McCarthyites haven’t done their homework. On a list of lawyers in recent government service who have served alleged terrorists, the first name might be Michael Chertoff’s. Chertoff served as counsel to Magdy El-Amir, a man identified as a leading Al Qaeda fundraiser in North America. Chertoff went on to head the criminal division at Justice and then to become secretary of Homeland Security. There is no hint that his ties to El-Amir in any way influenced Chertoff in his duties in the Bush Administration, nor would any reasonable person suspect that they would. The list would also include Michael Mukasey, Bush’s last attorney general, whose law firm had an active pro bono program writing appeals briefs in support of the Guantánamo inmates on constitutional issues, and Rudy Giuliani, whose firm was and is also engaged in representing Gitmo prisoners. It therefore came as no surprise when leading Republican lawyers quickly came out attacking the Cheney-Kristol-Goldfarb project as “shameful.”

But the question that Liz Cheney asks is an appropriate one. “Whose values do they share?” Perhaps it’s the values of John Adams. After the Boston Massacre, when revolutionary sentiment was flaring, Adams stood up to represent the British soldiers accused of slaughtering his fellow Bostonians in a criminal trial, and he helped them beat the rap. Most of his fellow citizens were dumbstruck by his decision, but at the end of a long life, looking back, Adams decided that this was “one of the best Pieces of Service I ever rendered my Country.” It’s the values of Kenneth Royall, the JAG colonel who defended a group of accused German saboteurs during World War II, bringing their appeal to the Supreme Court against the wishes of his commander-in-chief. Royall’s brilliant defense got him a promotion to brigadier general, and it later helped drive President Truman’s decision to name him the last American secretary of war. Vigorous defense of even the meanest person accused is an essential part of our democracy and our notions of justice—but it’s not a value that is shared by Liz Cheney.

Whose values does Liz Cheney share? Look at the nations around the world in which criminal defense counsel are harassed and persecuted. Look at Putin’s Russia and the case of Sergei Magnitsky, or Mugabe’s Zimbabwe and the case of Beatrice Mtetwa. Perhaps it is in countries like Russia and Zimbabwe that Liz Cheney and her Weekly Standard friends might find governments that share their values.

Meanwhile, the ACLU ran an ad in the New York Times on Sunday, calling on President Obama not to reverse his administration’s decision to prosecute the 9/11 suspects in civilian courts. 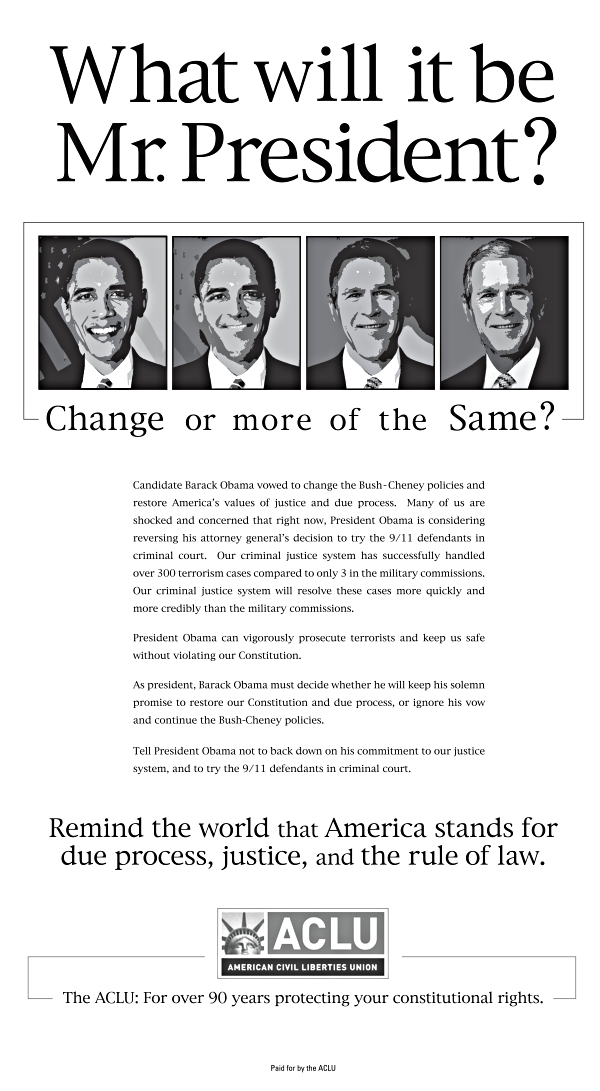