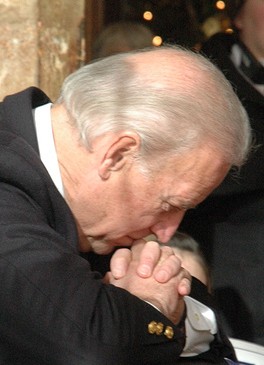 Has the vice president gone missing? Or is he hiding in a secure undisclosed location?

Strong words delivered by Joe Biden during his visit to Israel were widely reported last week.

“This is starting to get dangerous for us,” Biden warned his Israeli hosts. “What you’re doing here undermines the security of our troops who are fighting in Iraq, Afghanistan and Pakistan. That endangers us and it endangers regional peace.”

Many in Washington were apparently so shocked that Biden could have said something like this, they were, for several days, dumb-struck and rendered immobile.

One of the first to regain his senses was Jeffrey Goldberg. It can’t be true, Goldberg thought, and then set about getting to the bottom or at the very least the periphery of the story.

Where would one turn if one wanted to find out what the vice president said? Maybe the Office of the Vice President? Not if you’re Goldberg. He asked some fellow at the White House.

Meanwhile, Eric Re-Cantor had a chat with Rahm Emanuel, and the White House Chief of Staff confirmed that he too had heard from some guy (could have been Biden himself — we don’t know) that Biden was misquoted.

I guess I’m a bit of a stickler because when it comes to establishing what Biden did or did not say, I’d prefer to hear it from the vice president himself — or at least in a written statement from his office. He has a reputation for being blunt. I dearly hope he hasn’t lost it.