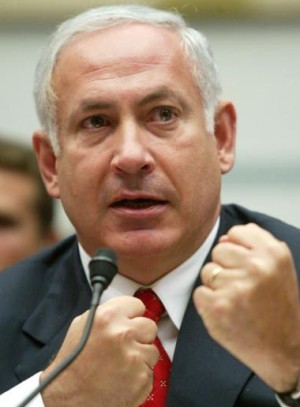 Netanyahu summed up his core thinking in his 1993 book, A Place Among the Nations: Israel and the World, when he said it was naive for Israelis to believe that “Arabs loathed war as much as they themselves.” He derided Israelis who thought of peace as “a kind of blissful castle in the clouds, a Jewish never-never land in which the Jews will be able finally to find a respite from struggle and strife.”

In Bibi’s view, the fight will go on and on. “True, continuing struggle does not necessarily mean perpetual war, but it does mean an ongoing national exertion and the possibility of periodic bouts of international confrontation … You cannot end the struggle for survival without ending life itself.” So to protect itself, in Netanyahu’s view, Israel has to be aggressive on all fronts, controlling the land, the sea, the sky, and above all the message—never giving an inch. To paraphrase the late Erich Segal, being Bibi means never having to say you’re sorry.

So it is difficult, to say the least, to be Netanyahu’s friend, and nobody knows that better than the Jordanians, who tried to build a solid peace with Israel during his last term as prime minister in the 1990s. “Today everything is déjà vu,” says Randa Habib, author of the forthcoming Hussein and Abdullah: Inside the Jordanian Royal Family.

Jordan had signed a peace treaty with Israel in 1994 only to see the architect of that accord, Prime Minister Yitzhak Rabin, gunned down by an Israeli terrorist in 1995. When Netanyahu won the elections that followed, Jordan’s late King Hussein had hopes he could work with Bibi. Hussein tried to build confidence by receiving the Israeli prime minister in Amman in August 1996, only to have the Israelis begin digging a tunnel under Muslim holy places in Jerusalem a few days later. In February 1997, Hussein invited Netanyahu to Amman again, hoping to improve the atmosphere, but the next day the Israelis announced approval of a whole new Jewish neighborhood, Har Homa, to be built in East Jerusalem. In both cases the timing seemed planned not only to embarrass King Hussein, but to implicate and weaken him.

Finally, King Hussein wrote bluntly to Netanyahu: “You are destroying peace. I have no trust in you.” In his response to the king, Netanyahu professed to be “amazed by your personal attack.”

A few months later, Israeli agents tried to kill Hamas leader Khaled Meshal, who was then in Amman, by spraying an exotic poison in his ear. Unlike the killers of another Hamas official in Dubai in January this year, the ones in Jordan were caught. Hussein demanded the antidote from Netanyahu, as well as the release of another Hamas leader, and did not turn over the captured Mossad agents until he got them. The Canadian government protested the use of its passports by the assassins, another harbinger of the Dubai case. But in the end, like today, nothing happened. “The Israelis will get away with all this; they always get away with it,” says Habib.

I am not so sure. Even a dozen years ago, the American public was largely passive about Middle East issues. Congressmen proclaimed undying support for Israel, and their constituents asked few questions. Now, with America involved in two wars in the Muslim world, that’s not the case. The 1,000-plus comments on Aluf Benn’s Newsweek column make that clear. But the decisive voices may belong to America’s generals. Are they ready to have Bibi Netanyahu’s vision of war-without-end dictate endless wars for American troops? The answer, almost certainly, is no.

Given the warm embrace that Benjamin Netanyahu is sure to receive at the AIPAC conference in Washington next week — whether he appears in person or opts for a diplomatically safer live video link — it’s time that the pro-Israel lobby within which AIPAC is the central pillar be referred to by a more accurate label: the pro-Israel anti-American lobby.

But let’s be honest. Given that there are no two states within the United States whose interests completely overlap, it is an absurd and audacious lie to claim that two nations separated by oceans, continents, cultures and thousands of miles have exactly the same interests.

In truth, the relationship between Israel and the United States is not one of indivisible interests but instead that of a dysfunctional familial tie.

In Yoav Shamir’s brilliant documentary, Defamation, there is a scene in which Abe Foxman, the president of the Anti-Defamation League, and a group of the ADL’s wealthy American supporters are talking about how they feel about Israel and how deep is their bond and commitment to the Jewish state’s survival. The consensus is that their attachment is like that of a parent for his or her own child; that they would sacrifice their own lives if that’s what Israel needed.

It’s hard to be clear about what state of development this Israel-child is in — rebellious teen, nursing infant or still tied by an umbilical chord. Whichever it is, the source of much its sustenance (unlike the ADL) is largely ignorant of the relationship.

When pollsters ask Americans about Israel they pose trite questions and solicit inane responses. But were Americans polled to find out whether they are happy to be providing aid which amounts to $1000 per Israeli citizen year in, year out, the likely responses would range from disbelief, to shock, to outrage. Americans who thought that number sounded “about right” would be in a small minority — especially in this struggling economy.

CNN’s Jack Cafferty poses the question: Is it time for the United States to get tougher with Israel?