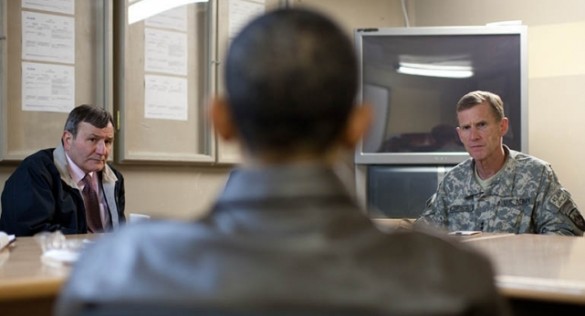 What was the most significant thing about President Obama’s surprise trip to Afghanistan on Sunday? He wore a leather bomber jacket.

Or, to be more precise, the most significant thing about Obama’s six-hour visit was nothing that he said, nor the fact that he went, but that in the utterly trivialized view of war that American civilians are fed, the fact that Obama’s attire would merit comment.

A recently leaked CIA document said that the foundation of support for the war from America’s European allies might be weakening. “Why Counting on Apathy Might Not Be Enough” a CIA “Red Cell” special memorandum warned.

While the apathy of Europeans might be in jeopardy, American apathy appears to be as reliable as ever.

Contrary to Obama’s claim that the war in Afghanistan is a war of necessity, it is really a war of indifference — a war that continues because the people paying for it don’t care strongly enough to object to its continuation. Most importantly, Americans have by and large acquiesced to the notion that perpetual war is a condition of this era rather than a product of political policy. War has become an inobtrusive background noise in the American way of life.

Postscript: The “effortless” in the headline is an allusion to that forgotten expression: the war effort.

The fact that America’s wars of this last decade have required no war effort is one of the most telling ways in which these have not been wars of necessity. In a war of necessity, a civilian war effort is not merely required; it is unavoidable.

Whereas the civilian role in a war effort is an adjunct to the military effort, in a war that requires no war effort, there is no civilian role. There is instead a necessity that civilians be cocooned by an infantilism engendered by consumerism, which is to say, that they be easily pacified and rendered politically apathetic by having their trivial desires easily fulfilled.