At Foreign Policy in Focus, John Feffer draws attention to the contradiction between Israel’s behavior as a rogue state and the fact that it is about to be granted the privileged status of membership in the Organization for Economic Cooperation and Development — unless, that is, a country such as Turkey steps up and exercises its right to cast a veto. 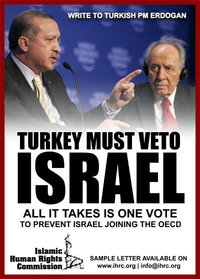 North Korea and Israel have a lot in common.

Neither is a signatory to the Nuclear Non-Proliferation Treaty (NPT), and both employ their nuclear weapons in elaborate games of peek-a-boo with the international community. Israel and North Korea are equally paranoid about outsiders conspiring to destroy their states, and this paranoia isn’t without some justification. Partly as a result of these suspicions, both countries engage in reckless and destabilizing foreign policies. In recent years, Israel has launched preemptive strikes and invaded other countries, while North Korea has abducted foreign citizens and blown up South Korean targets (including, possibly, a South Korean ship in late March in the Yellow Sea).

And they’re both exceptions in their regions: Israel is a Jewish state in an Arab region; North Korea is an old-style feudal dictatorship in an Asian region marked by relative prosperity and political openness. But the two countries often behave as if they are exceptions to all other rules as well. For instance, they both share an antipathy toward human rights organizations that attempt to hold them to international standards. Witness the recent attacks by Israel (and its hard-right supporters) of Human Rights Watch because of reports critical of Israel’s human rights record. North Korea also routinely rejects human rights inquiries as a challenge to its sovereignty. (For a proposal on a better strategy to engage North Korea on human rights issues, check out my latest piece Starting Where North Korea Is.)

Despite these similarities, these two roguish powers haven’t had a great deal of interaction. Between 1992 and 1994, Israel secretly negotiated a billion dollar buy-out of North Korea’s missile export program to the Middle East, and the United States intervened to nix the deal (only to explore a similar option with North Korea at the end of the Clinton administration). In 2007, Israel bombed a suspected nuclear facility in Syria that may or may not have been built with North Korean assistance. Otherwise, the two countries maintain their innocence and distance.

And yet one country is an official rogue and the other country only plays one on Arab TV. The difference in designation owes much to U.S. policy. One of the perks of world domination is the chance to make like Adam in Genesis and name all the animals. North Korea, according to Washington, is beyond the pale. Israel, however, is “one of us”: firmly ensconced in the Judeo-Christian tradition, accorded honorary European status, and even considered worthy of membership in the Organization for Economic Cooperation and Development (OECD).

Britain has refused to allow Israel’s Mossad secret service to send a representative back to the country’s London embassy following the row over the killing of a Hamas operative by agents using forged UK passports.

Israel’s Yediot Aharonot newspaper reported yesterday that the Foreign Office is digging in its heels because Israel is refusing to commit itself not to misuse British passports in future clandestine operations.