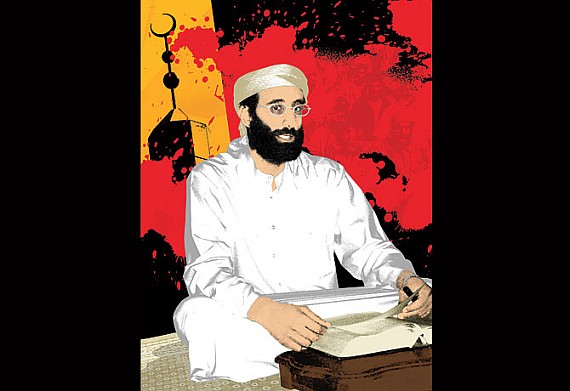 But if Osama bin Laden can’t be tracked down, maybe the alternative is to elevate an easier target to the same status in the hope of being able to claim an equal victory. It appears that the American-born and now fugitive imam, Anwar al-Awlaki, is being groomed for such a role.

This is how the New York Times is feeding the narrative:

One day in August 2001, Mr. Awlaki knocked at the door of Mr. Higgie, his neighbor [in San Diego], to say goodbye. He had moved the previous year to Virginia, becoming imam at the far bigger Dar al-Hijrah mosque, and he had returned to pick up a few things he had left behind.

As Mr. Higgie tells it, he told the imam to stop by if he was ever in the area — and got a strange response. “He said, ‘I don’t think you’ll be seeing me. I won’t be coming back to San Diego again. Later on you’ll find out why,’” Mr. Higgie said.

The next month, when Al Qaeda attacked New York and Washington, Mr. Higgie remembered the exchange and was shaken, convinced that his friendly neighbor had some advance warning of the Sept. 11 attacks.

In fact, the F.B.I. had first taken an interest in Mr. Awlaki in 1999, concerned about brushes with militants that to this day remain difficult to interpret. In 1998 and 1999, he was a vice president of a small Islamic charity that an F.B.I. agent later testified was “a front organization to funnel money to terrorists.” He had been visited by Ziyad Khaleel, a Qaeda operative who purchased a battery for Osama bin Laden’s satellite phone, as well as by an associate of Omar Abdel Rahman, the so-called Blind Sheik, who was serving a life sentence for plotting to blow up New York landmarks.

Still more disturbing was Mr. Awlaki’s links to two future Sept. 11 hijackers, Khalid al-Midhar and Nawaq Alhazmi. They prayed at his San Diego mosque and were seen in long conferences with the cleric. Mr. Alhazmi would follow the imam to his new mosque in Virginia, and 9/11 investigators would call Mr. Awlaki Mr. Alhazmi’s “spiritual adviser.”

The F.B.I., whose agents interviewed Mr. Awlaki four times in the days after the Sept. 11 attacks, concluded that his contacts with the hijackers and other radicals were random, the inevitable consequence of living in the small world of Islam in America. But records of the 9/11 commission at the National Archives make clear that not all investigators agreed.

One detective, whose name has been redacted, told the commission he believed Mr. Awlaki “was at the center of the 9/11 story.” An F.B.I. agent, also unidentified, said that “if anyone had knowledge of the plot, it would have been” the cleric, since “someone had to be in the U.S. and keep the hijackers spiritually focused.”

The 9/11 commission staff members themselves had sharp arguments about him. “Do I think he played a role in helping the hijackers here, knowing they were up to something?” said one staff member, who would speak only on condition of anonymity. “Yes. Do I think he was sent here for that purpose? I have no evidence for it.”

Let’s assume that the suspicions about Awlaki are well-founded. And let’s set aside questions about the legality or morality of Obama’s policy of targeted killing. The question this administration should soberly consider, now that Awlaki has been designated a target for assassination, is whether this influential imam poses a greater threat dead or alive?

Are we really to believe that while Awlaki remains a fugitive in Yemen and is dodging drone attacks, he is also handling an operational role in planning new attacks on the US? After all, one of George Bush’s favorite expressions, “on the run,” did actually have some practical and realistic implications.

And are we really to believe that once granted the status of martyr, Awlaki’s widely disseminated lectures and his iconic status would exert less and not more influence among those most likely to become radicalized in their hostility towards the United States?

In other words, right or wrong, is killing Anwar al-Awlaki really a smart idea?