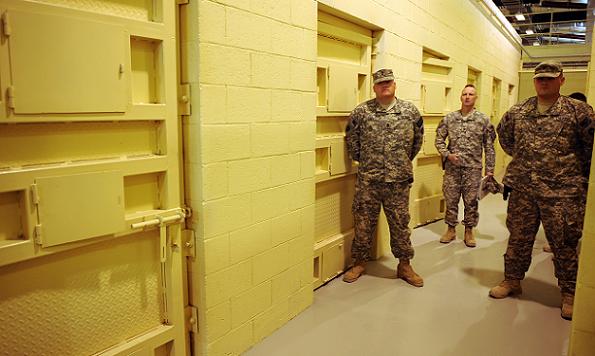 Two days after taking office, Barack Obama signed an executive order banning torture. The era of secret detention facilities and CIA-administered waterboarding were over. Or so we thought.

Earlier this week, the BBC reported:

The US airbase at Bagram in Afghanistan contains a facility for detainees that is distinct from its main prison, the Red Cross has confirmed to the BBC.

Nine former prisoners have told the BBC that they were held in a separate building, and subjected to abuse.

The US military says the main prison, now called the Detention Facility in Parwan, is the only detention facility on the base.

However, it has said it will look into the abuse allegations made to the BBC.

The International Committee of the Red Cross (ICRC) said that since August 2009 US authorities have been notifying it of names of detained people in a separate structure at Bagram.

“The ICRC is being notified by the US authorities of detained people within 14 days of their arrest,” a Red Cross spokesman said.

“This has been routine practice since August 2009 and is a development welcomed by the ICRC.”

The spokesman was responding to a question from the BBC about the existence of the facility, referred to by many former prisoners as the Tor Jail, which translates as “black jail”.

Prisoners say they have been kept in isolation in cold cells and subjected to sleep deprivation, but it turns out the CIA’s hands are clean — this time it’s the Defense Intelligence Agency at work. And as for the fact that the Red Cross has been barred from entering this facility, that’s because it isn’t being called a detention facility.

Defense officials said that the White House is kept appraised of the methods used by interrogators at the site. The reason why the Red Cross hasn’t been invited to tour it, officials said, was because the U.S. does not believe it to be a detention facility, classifying it instead as an intelligence gathering facility.

A Defense official said that the agency’s inspector general had launched an internal investigation into reports in the Washington Post that several teenagers were beaten by the interrogators, but [Pentagon spokesman, Bryan] Whitman disputes this.

When the Obama Administration took over, it forbade the DIA from keeping prisoners in the facility longer than 30 days, although it is not clear how that dictum is enforced. It is also not clear how much Congress knows about the DIA’s interrogation procedures, which have largely escaped public scrutiny.