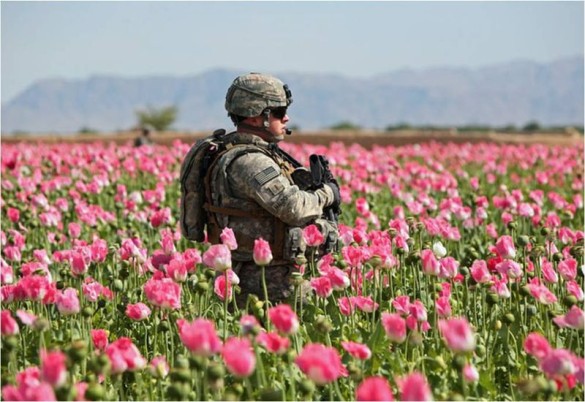 A mystery disease infecting opium poppies in Afghanistan could cut this year’s illicit crop in some areas by up to 70 percent, an official said Sunday.

The disease has led authorities to expect a “significant” reduction in opium production this year, with the UN Office on Drugs and Crime (UNODC) saying this week that the output could fall by up to 25 percent.

Daud Daud, Afghanistan’s deputy interior minister for counter-narcotics, said that “in some areas up to 70 percent of the crops have been destroyed” by the disease.

“We’ll have a significant reduction” in the opium production “this year,” Daud said, refusing to give further details, saying that an overall survey of this year’s output was still under way.

Afghanistan produces more than 90 percent of the world’s opium, the raw material for making heroin, mainly in the provinces of Helmand and Kandahar in the south and Farah in southwest.

“Interestingly there is a natural disease that is infecting opium in five provinces,” said Daud.

He could not confirm what disease had infected the crops but blamed it on an insect infestation. He said the disease was being investigated in government laboratories.

Antonio Maria Costa, the head of UNODC, has said the disease was a fungus, while some farmers have reportedly blamed the US and Britain for spraying their crops with a chemical in an effort to eradicate opium.

It’s hardly surprising that locals suspect they might be victims of some kind of foreign intrigue as they watch their lucrative crop wither but in this instance one doesn’t have to believe in conspiracy theories to have some doubts.

In October 2000, BBC television reported that a former biological warfare factory was being used in a British-funded project aimed at stemming heroin production.

Scientists in the plant in Uzbekistan are trying to perfect the Pleospora fungus that kills the opium poppy – source of the world’s illegal heroin supply.

But the research work may already be running out of control. Mike Greaves, the British scientist who is the secret project’s expert consultant, admits in a rare interview that he cannot be certain the fungus is 100% safe.

Despite this Greaves, a micro-biologist from Bristol, is convinced the fungus is a ‘sensational’ answer to the world’s heroin problem. He says: “I love the project, it’s one of the most exciting projects that I’ve been involved in.”

Professor Paul Rogers, a leading British plant pathologist warns: “The fungus sounds like a silver bullet but it could easily become a poisoned chalice. Once you develop a technology to spread plant diseases intentionally you are developing a technology which could easily be misused by bad people against legitimate food crops.”

2 thoughts on “Biological warfare in Afghanistan?”