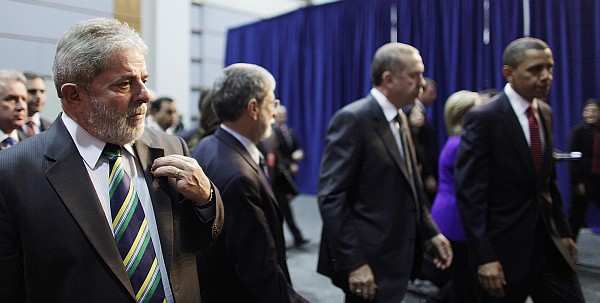 In a world long dominated by Western powers, the global order has been one shaped by coercion. Although the twentieth century saw the end of formal colonialism — the most overt coercive system — the perpetuation of economic colonialism has meant that the United States and its allies still expect to have the final word on most issues of global importance.

It seems natural then as a new global order emerges, Western domination will not get replaced by another form of domination — the Western coercive paradigm itself will be rejected. This indeed, is the new approach to diplomacy that is being pioneered by Brazil and Turkey.

If Barack Obama really embodied a new way of thinking, we’d have reason to hope that he’d be nimble enough to adapt to the momentous period of change that is now unfolding, yet so far all the indications are that whatever his personal abilities might be, he remains firmly tethered to an arthritic diplomatic and political establishment.

The nuclear swap deal just struck by Brazil, Turkey and Iran could be grasped as an unexpected but welcome opportunity. Instead, Washington’s guarded response barely conceals the fact that it sees it own power as being usurped.

In the Financial Times, Jonathan Wheatley notes that the deal may vindicate Brazilian diplomacy and prove the skeptics wrong.

The idea that Iran would abandon its alleged nuclear weapons programme in favour of a peaceful nuclear energy programme in response to amicable talks rather than under the threat of UN-backed sanctions seemed unrealistic, even naïve. But it may well have paid off. Even a US official conceded today that the latest news was “potentially a good development.”

If so, Celso Amorim, Brazil’s foreign minister, can be forgiven some self-satisfaction. “We are holding conversations in a respectful manner and with conviction . . . Our language is not that of pressure. Our language is that of persuasion, friendship and cooperation,” he told reporters in Tehran on Monday.

The recent visit by Luiz Inacio Lula da Silva, Brazil’s president, to Iran is part of a broad multilateral foreign policy that he believes is commensurate with his nation’s ever-growing importance in a changing world axis.

Brazil under Lula’s eight year reign has promoted trade between Israel and Latin America, while supporting talks with Hamas and Palestinian statehood. It has balked at US urges for sanctions on Iran over their nuclear programme, which Washington believes has nefarious intentions, while on Sunday it brokered an agreement in which Tehran exchanges low-enriched uranium for nuclear fuel.

Diplomatic ties have been created with more than 40 nations, including North Korea, and Brasilia maintains good relations across divides, for instance with foes Venezuela and Colombia.

Like India, Brazil is advocating for a permanent seat at the UN Security Council and wants reform of the International Monetary Fund (IMF) to better represent developing nations.

For as Lula said in an interview with Al Jazeera this week, international geopolitics is shifting and global governance needs to change with it.

The impact of the agreement on Israel — where coercion is generally regarded as the only effective tool of persuasion — was summed up by Yossi Melman:

The agreement on the transfer of Iran’s enriched uranium, achieved via Turkish-Brazilian mediation, is an important victory for Iranian diplomacy and a debacle for Israeli policy. The deal reduces the chances, which were slim to begin with, of new sanctions being imposed on Iran, and makes a military strike against Iran even less feasible.

Turkey is the deal’s big winner. Trade between Iran and Turkey already stands at $10 billion annually, so if sanctions were imposed on Tehran, Turkey would suffer a massive blow to its economy – and Prime Minister Recep Tayyip Erdogan’s party would suffer a major political setback. Alternatively, should Turkey decide not to uphold the sanctions, it might find itself in a crisis with the United States and Europe. Hence the tremendous effort Turkey made to achieve the deal, despite American warnings that Iran might be using Turkey in order to buy time.

Why did Iran choose to see Turkey as an “honest broker” and make the deal with it instead of with the permanent Security Council members? The two countries’ good relations are not free of suspicion, but both Iran and Turkey have adopted a policy of expanding their influence in the Middle East, influence of the sort that relies on cooperation rather than competition.

The closer ties between Turkey and Syria, Iran’s ally; the similar attitude that Turkey and Iran have toward Hamas; their shared interests in Iraq; and a similar view of radical Islamic terrorism all combined with Turkey’s disappointment over European views of its candidacy to join the European Union to create a confluence of interests that, for the time being, trumps their disagreements. Moreover, from an ideological standpoint, Iran prefers Turkey to the U.S.: Any concession to Washington or its Security Council partners would be perceived as a surrender.

China welcomed Iran’s new nuclear fuel-swap agreement, saying the deal supports Beijing’s long-held position that the international dispute over Iran’s nuclear ambitions can be resolved through diplomacy rather than sanctions or force.

Under the deal arranged by Brazil and Turkey, Iran will ship out some of its uranium to Turkey, have it enriched and then shipped back to Iran for use in a medical research reactor. Western powers want to keep Iran from enriching uranium on its own soil, because it fears that fuel will end up being used for nuclear weapons, which Tehran denies. The latest deal is a weakened version of one that was negotiated last October but fell through after Iran’s government didn’t approve it.

For China, a deal brokered by Brazil and Turkey is in line with its broader vision of a more multipolar world order not dominated by Washington.

Julian Borger thinks that Iran might have overplayed its hand.

The initial western response to the new Turkish-Brazilian-Iranian uranium swap deal was akin to a chess player realising loss is inevitable. There was an awkward silence and quietly spreading panic as western capitals looked a few moves ahead and could not think of a way of escaping the trap they had fallen into. The deal would have to be accepted, even though it did little to slow down Iran’s nuclear drive, and the push for sanctions in New York would deflate.

And then, the Iranian foreign ministry decided to speak. The spokesman, Ramin Mehmanparast, declared: “Of course, enrichment of uranium to 20% will continue inside Iran.”

The announcement was stunning. Iran’s justification for beginning 20% enrichment in February, was that it needed the material to make medical isotopes for the Tehran research reactor, although it was unclear how the Iranians were going to fabricate the necessary rods. Under this new deal, the rods will be provided free of charge. What then would be the civilian use of Iran’s home-enriched uranium?

For those already convinced Iran is working its way to breakout nuclear weapons capacity, the point of enriching to 20% is clear. In engineering terms it is a lot more than half way to 90% weapons-grade material, and an important test of the reliability of Iran’s centrifuges in reaching that goal.

Within minutes, the western capitals, tongue-tied over their response for the first few hours, began to rally.

But if Washington hoped that there might at least be unity in the expression of Western reservations about the deal, that hope was swiftly undermined as the French President Nicholas Sarkozy said he sees this development as a “positive step.”