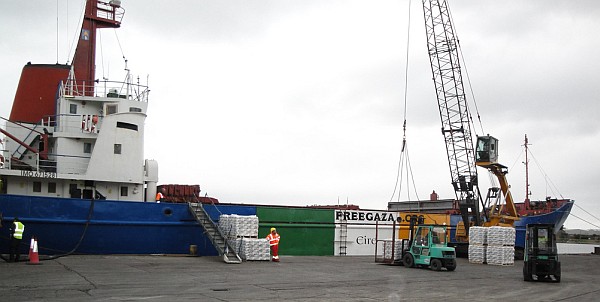 Later this month, ships from all over the world will converge in the Mediterranean and set sail for the occupied and besieged Gaza Strip. This international coalition is called the Freedom Flotilla.

The Free Gaza Movement has sailed eight missions to Gaza in the past three years, five of them successful. The last three were violently stopped by the Israeli Navy; the boat Dignity was rammed three times and the Spirit of Humanity turned back in January 2009, then seized and all aboard arrested.

This time the Freedom Flotilla is upping the ante and instead of one- and two-vessel challenges, will be breaking Israel’s siege with an eight-boat front.

In the past, the Israel Navy could pick us off as individual boats. Now, including Free Gaza’s four ships, 700 passengers and some 5,000 tons of reconstruction materials and medical equipment. This includes Free Gaza’s MV Rachel Corrie, which was purchased through generous donations from Malaysia’s Perdana Global Peace Foundation.

The Israeli government has responded to the “sea intifada” coming its way with saber rattling and accusations of serving Hamas. Israel has proscribed the Turkish human rights and relief group Insani Vardim Vakafi (IHH). IHH is responsible for sending a cargo ship and passenger ship in the Freedom Flotilla. Israel has accused it and Free Gaza of “supporting terrorism.” Half the Israeli navy is set to challenge the mission, with Israeli Defense Minister Ehud Barak at the helm commanding the operation in person. The air force is on standby and “diplomatic pressure” is being applied behind the scenes. The message is clear from Israel: “We will stop you and we will use force to stop you.”

At no point does the Freedom Flotilla enter Israeli territorial waters. The journey starts in local European or Turkish waters, courses through international waters and ends in Gaza’s territorial waters. No checkpoints interrupt us. No walls daunt our sight. We’ve proven that it’s possible to sail a clear line with no borders, as we want the world to be, until we get to Gaza.