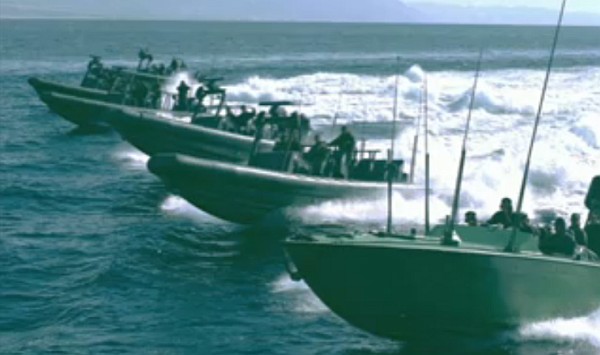 Israeli foreign ministry spokesmen Yigal Palmor told the Wall Street Journal that in dealing with the Freedom Flotilla, Israel faces the choice of either looking stupid or like brutes — or like pirates!

Masked Israeli commandos — with daggers clenched between their teeth? — will soon likely take control of the ships.

Israel on Thursday unveiled a massive makeshift detention center in the country’s main southern port and announced the end of days of intense naval maneuvers, vowing to stop a flotilla of hundreds of pro-Palestinian activists trying to break a 3-year blockade of the Gaza Strip this weekend.

Military authorities said that masked naval commandos would greet the eight ships deep out at sea, escort the vessels to port and give each of the activists a stark choice: leave the country or go to jail.

But the tough response threatened to backfire by breathing new life into the activists’ mission and drawing new attention to the oft-criticized blockade of Gaza.

“We know that we are sailing for a good cause,” said Dror Feiler, 68, an Israeli-born Swedish activist who was on board a cargo ship headed from Greece to Gaza. “If the Israelis want us to pay a price, we will pay a price, but we will come again and again.”

Some 750 activists, including a Nobel peace laureate and former U.S. congresswoman, have set sail for the Gaza coast in recent days, carrying 10,000 tons of humanitarian supplies. They are expected to reach the Israeli coast on Saturday. 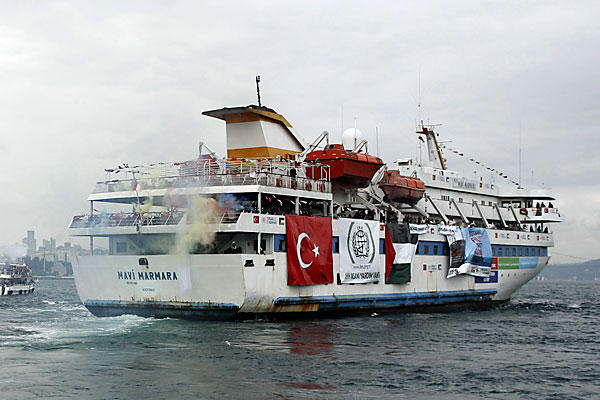 Israeli Defense Minister Ehud Barak named a team of public-relations experts and military officers to come up with ideas for how to blunt the public-relations blow from the aid fleet, according to members of the Labour Party that Mr. Barak leads. The Israeli military has launched an aggressive public-outreach effort. At an unusual, last-minute news conference on Gaza’s border Wednesday morning, officers emphasized that Israel was already allowing generous quantities of aid into Gaza and dismissed claims by organizers of the aid flotilla that Gaza is facing a humanitarian crisis.

“This is nothing more than media provocation and has nothing to do with actually providing aid to residents of the Gaza Strip,” said military spokeswoman Lt. Col. Avital Leibovitch. “They have everything they need.”

As Larry Derfner writes, mocking such claims: “I only wish somebody would treat us Israelis like we treat people in Gaza.”

The IDF, which seems to have adopted a scattershot approach in its messaging, tells the Christian Science Monitor that it fears the flotilla may attempt to smuggle militants and weapons into Gaza — two of the few resources in which the Strip is, by most accounts, already amply supplied.

As if to demonstrate that Israel’s officials have a talent for making the Jewish state look brutish and stupid, the one thing that seems to have escaped their attention is this: Western news organizations have a meager amount of interest in activist endeavors such as the Freedom Flotilla. The only thing that really grabs the mainstream media’s attention is Israel’s heavy-handed way of responding to such activism.

Yigal Palmor says: “If we let them throw egg at us, we appear stupid with egg on our face.” But here’s a thought: Israel doesn’t have to look stupid or brutish. It could lift the siege — a siege which by Israel’s own account clearly isn’t working — and show the world that there still are a few signs of intelligent life inside Israel.