“All I saw in Israel was cowards with guns.” These are the words of Ken O’Keefe, a former US Marine who was just deported from Israel after surviving the Mavi Marmara massacre.

In 2002, O’Keefe initiated what some would regard as a quixotic endeavor: an effort to prevent the war in Iraq by positioning Western volunteers as human shields at strategic sites in Iraq. The Truth Justice Peace action failed, but O’Keefe’s passion to follow the dictates of his own conscience has continued unabated.

This is part of a statement O’Keefe made upon arriving in Istanbul on Friday after his expulsion from Israel: 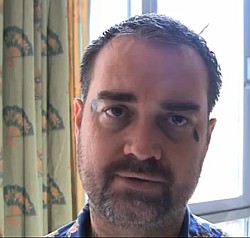 I remember being asked during the TJP Human Shield Action to Iraq if I was a pacifist, I responded with a quote from Gandhi by saying I am not a passive anything. To the contrary I believe in action, and I also believe in self-defence, 100%, without reservation. I would be incapable of standing by while a tyrant murders my family, and the attack on the Mavi Marmara was like an attack on my Palestinian family. I am proud to have stood shoulder to shoulder with those who refused to let a rogue Israeli military exert their will without a fight. And yes, we fought.

When I was asked, in the event of an Israeli attack on the Mavi Mamara, would I use the camera, or would I defend the ship? I enthusiastically committed to defence of the ship. Although I am also a huge supporter of non-violence, in fact I believe non-violence must always be the first option. Nonetheless I joined the defence of the Mavi Mamara understanding that violence could be used against us and that we may very well be compelled to use violence in self-defence.

I said this straight to Israeli agents, probably of Mossad or Shin Bet, and I say it again now, on the morning of the attack I was directly involved in the disarming of two Israeli Commandos. This was a forcible, non-negotiable, separation of weapons from commandos who had already murdered two brothers that I had seen that day. One brother with a bullet entering dead center in his forehead, in what appeared to be an execution. I knew the commandos were murdering when I removed a 9mm pistol from one of them. I had that gun in my hands and as an ex-US Marine with training in the use of guns it was completely within my power to use that gun on the commando who may have been the murderer of one of my brothers. But that is not what I, nor any other defender of the ship did. I took that weapon away, removed the bullets, proper lead bullets, separated them from the weapon and hid the gun. I did this in the hopes that we would repel the attack and submit this weapon as evidence in a criminal trial against Israeli authorities for mass murder.

I also helped to physically separate one commando from his assault rifle, which another brother apparently threw into the sea. I and hundreds of others know the truth that makes a mockery of the brave and moral Israeli military. We had in our full possession, three completely disarmed and helpless commandos. These boys were at our mercy, they were out of reach of their fellow murderers, inside the ship and surrounded by 100 or more men. I looked into the eyes of all three of these boys and I can tell you they had the fear of God in them. They looked at us as if we were them, and I have no doubt they did not believe there was any way they would survive that day. They looked like frightened children in the face of an abusive father.

But they did not face an enemy as ruthless as they. Instead the woman provided basic first aid, and ultimately they were released, battered and bruised for sure, but alive. Able to live another day. Able to feel the sun over head and the embrace of loved ones. Unlike those they murdered. Despite mourning the loss of our brothers, feeling rage towards these boys, we let them go. The Israeli prostitutes of propaganda can spew all of their disgusting bile all they wish, the commandos are the murders, we are the defenders, and yet we fought. We fought not just for our lives, not just for our cargo, not just for the people of Palestine, we fought in the name of justice and humanity. We were right to do so, in every way. 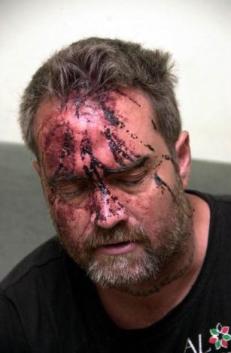 While in Israeli custody I, along with everyone else was subjected to endless abuse and flagrant acts of disrespect. Women and elderly were physically and mentally assaulted. Access to food and water and toilets was denied. Dogs were used against us, we ourselves were treated like dogs. We were exposed to direct sun in stress positions while hand cuffed to the point of losing circulation of blood in our hands. We were lied to incessantly, in fact I am awed at the routineness and comfort in their ability to lie, it is remarkable really. We were abused in just about every way imaginable and I myself was beaten and choked to the point of blacking out… and I was beaten again while in my cell.

In all this what I saw more than anything else were cowards… and yet I also see my brothers. Because no matter how vile and wrong the Israeli agents and government are, they are still my brothers and sisters and for now I only have pity for them. Because they are relinquishing the most precious thing a human being has, their humanity.

In conclusion; I would like to challenge every endorser of Gandhi, every person who thinks they understand him, who acknowledges him as one of the great souls of our time (which is just about every western leader), I challenge you in the form of a question. Please explain how we, the defenders of the Mavi Marmara, are not the modern example of Gandhi’s essence? But first read the words of Gandhi himself.

“I do believe that, where there is only a choice between cowardice and violence, I would advise violence…. I would rather have India resort to arms in order to defend her honour than that she should, in a cowardly manner, become or remain a helpless witness to her own dishonour.” – Gandhi

And lastly I have one more challenge. I challenge any critic of merit, publicly, to debate me on a large stage over our actions that day. I would especially love to debate with any Israeli leader who accuses us of wrongdoing, it would be my tremendous pleasure to face off with you. All I saw in Israel was cowards with guns, so I am ripe to see you in a new context. I want to debate with you on the largest stage possible. Take that as an open challenge and let us see just how brave Israeli leaders are.

I doubt that there is a single Israeli official who would have the guts to take up O’Keefe’s challenge. Instead, the IDF has issued a laughable claim:

Ken O’Keefe (Born 1969), an American and British citizen, is a radical anti-Israel activist and operative of the Hamas Terror organization. He attempted to enter the Gaza Strip in order to form and train a commando unit for the Palestinian terror organization.

The IDF spelled his name correctly and the year he was born — thereafter, the errors and deceptions follow. O’Keefe renounced his US citizenship in March 2001. He is now an Irish and Palestinian citizen, though describes himself as “in truth a world citizen.”

If the IDF had a shred of evidence that O’Keefe was heading to Gaza to train a commando unit for Hamas, I guarantee he would not now be in Istanbul. He would be in an Israeli jail awaiting trial. (In an interview with Al Jazeera appearing below, he does indeed dismiss Israel’s claims.)

But when O’Keefe says that all he saw in Israel was “cowards with guns” he points to a fundamental truth that reveals the character of the Jewish state.

As a nation that revels in its willingness to crush its opponents, Israel operates with the mindset of every bully: it only feels convinced of its strength when facing a weak opponent.

Lacking the courage to hold its own among equals, Israel operates in a world defined by dominance and oppression.

(Thanks to Ann El Khoury at Pulse for reporting on O’Keefe’s statement.)