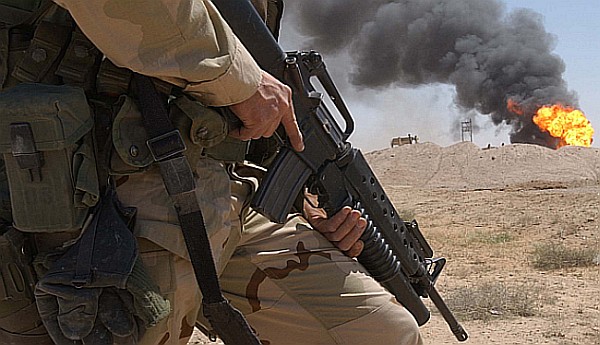 As President Obama addressed the nation last night, he employed the impoverished language of a nation for which all things must supposedly be seen in terms of war. He spoke of “the battle we’re waging against an oil spill that is assaulting our shores and our citizens.”

“We will fight this spill with everything we’ve got for as long as it takes,” Obama said unconvincingly invoking a Churchillian spirit for tackling this sticky foe. He then laid out his “battle plan.”

It’s not that war is inherently a useless metaphor, but, to borrow one of Tom Engelhardt’s favorite expressions and the title of his new book, when it comes to the American way of war, war now has all the wrong connotations.

War spreads, is expensive, messy, difficult to end and difficult to justify. If the Obama administration claims it’s fighting a war against an oil spill, why exactly at this point in America’s history are we now supposed to have confidence in America’s war-fighting capabilities?

It seems that the path of war that America’s leaders persistently tread is a path they continue down (whether literally or metaphorically) not because they have confidence in reaching a desirable destination but because this has become the only path they know.

In this respect, as Tom Engelhardt points out, the United States is now following resolutely in the footsteps of the Soviet Union.

Mark it on your calendar. It seems we’ve finally entered the Soviet era in America.

You remember the Soviet Union, now almost 20 years in its grave. But who gives it a second thought today? Even in its glory years that “evil empire” was sometimes referred to as “the second superpower.” In 1991, after seven decades, it suddenly disintegrated and disappeared, leaving the United States — the “sole superpower,” even the “hyperpower,” on planet Earth — surprised but triumphant.

The USSR had been heading for the exits for quite a while, not that official Washington had a clue. At the moment it happened, Soviet “experts” like Secretary of Defense Robert Gates (then director of the CIA) still expected the Cold War to go on and on. In Washington, eyes were trained on the might of the Soviet military, which the Soviet leadership had never stopped feeding, even as its sclerotic bureaucracy was rotting, its economy (which had ceased to grow in the late 1970s) was tanking, budget deficits were soaring, indebtedness to other countries was growing, and social welfare payments were eating into what funds remained. Not even a vigorous, reformist leader like Mikhail Gorbachev could staunch the rot, especially when, in the late 1980s, the price of Russian oil fell drastically.

Looking back, the most distinctive feature of the last years of the Soviet Union may have been the way it continued to pour money into its military — and its military adventure in Afghanistan — when it was already going bankrupt and the society it had built was beginning to collapse around it. In the end, its aging leaders made a devastating miscalculation. They mistook military power for power on this planet.

2 thoughts on “Entering the Soviet era in America”