In a May 7 article, Haaretz reporter Ilana Hammerman described in dramatic detail a crime she had methodically planned and committed. In defiance of laws supposedly related to Israel’s security, Hammerman picked up three teenage Palestinian girls in their village in the West Bank, took them through the Betar checkpoint, and drove them into Tel Aviv. There they ate ice cream, visited the mall and museum, and played in the sea. Even though the girls lived just a few kilometers from the beach, Israel’s military occupation had prevented them from ever visiting it before their illegal “day of fun.”

Hammerman wrote in her account of the experience, “If There Is A Heaven:”

“The end was wonderful. The last photos show them about two hours after the trip to the flea market, running in the darkness on Tel Aviv’s Banana Beach. They didn’t want to stop for even a minute at the restaurant there to have a bite to eat or something to drink, or even to just relax a bit. Instead they immediately removed their sandals again, rolled up their pants and ran into the water. And ran and ran, back and forth, in zig-zags, along the huge beach, ponytails flying in the wind. From time to time, they knelt down in the sand or crowded together in the shallow water to have their picture taken. The final photo shows two of them standing in the water, arms around each others’ waists, their backs to the camera. Only the bright color of their shirts contrasting with the dark water and the sky reveals that the two are Yasmin and Aya, because Lin was wearing a black shirt.” 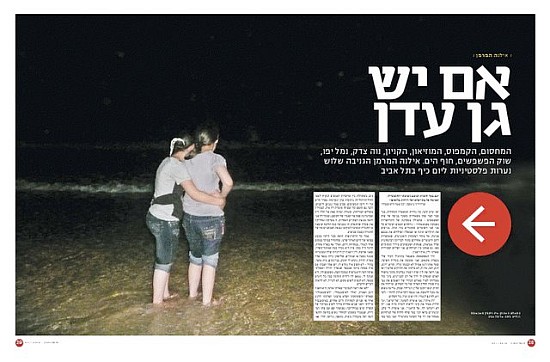 But the fun ended as soon as a group called The Legal Forum for the Land of Israel filed a request with Israeli Attorney General Yehuda Weinstein demanding that Hammerman be prosecuted for breaking the country’s “Law of Entry to Israel” forbidding Israelis from assisting Palestinians in entering Israel. If Weinstein agrees to the request, Hammerman could face as much as two years in prison.

3 thoughts on “Where kindness is a crime”