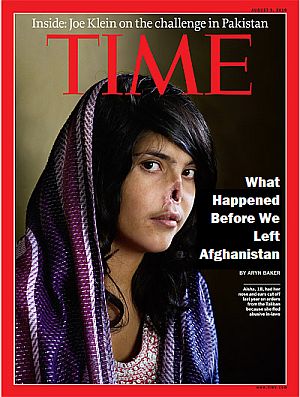 “What Happens if We Leave Afghanistan” predicts the latest Time magazine cover, yet Time has not mastered a new art — taking photographs of the future. The image reflects what has happened under our watch and rather than representing the dreadful fate for Afghan women should the US and its allies prematurely relinquish control, it underlines the fact that we have never had anything more than a tenuous grip on Afghanistan.

The idea that we went there to make it a better country merely pandered to our world-saving vanity. A war billed as a necessity — the linchpin of American national security — was itself a face-saving exercise. It wasn’t about saving the faces of Afghan women, but saving the reputation of America’s military might after its weakness had been exposed by a small band of men armed with nothing more than box cutters.

The means through which the US will eventually extricate itself from this ill-conceived war will likewise be another face-saving exercise through which failure can be dressed up as success.

Meanwhile, as fewer Americans are acquiring college degrees, more are taking to the streets to protest against the construction of mosques — even while a recent study indicates mosques deter the spread of Islamic militancy.

9/11 might have caused a national wound, but the means through which we treated it turned out to be more harmful than the injury itself. Nine years later should mean nine years wiser. Instead, we find ourselves living in a nation that gets harder to parody, as reality itself becomes increasingly absurd.

Consider for instance the Pentagon’s ways of responding to Wikileaks — demanding leaked documents be “returned” (as though they had been spirited away to a secret location where a stash of Xerox sheets are now hidden) while telling DoD employees they mustn’t look at the documents (as though they’re now going to pretend they forgot how to use the internet).

Any citizen, any foreign spy, any member of the Taliban, and any terrorist can go to the WikiLeaks website, and download detailed information about how the U.S. military waged war in Afghanistan from 2004 to 2009. Members of that same military, however, are now banned from looking at those internal military documents. “Doing so would introduce potentially classified information on unclassified networks,” according to one directive issued by the armed forces.

That cry you hear? It’s common sense, writhing in pain.

There was a time, just a few months ago, when the Pentagon appeared to be growing comfortable with the emerging digital media landscape. Troops were free to blog and tweet, as long as they used their heads and didn’t disclose secrets. Thumb drives and DVDs could be employed, as long as they didn’t carry viruses or classified information. But the WikiLeaks disclosures — tens of thousands of classified documents — seem to have reversed that trajectory.

And in a commentary on this country’s perversely misconceived national priorities, Glenn Greenwald writes:

As we enter our ninth year of the War in Afghanistan with an escalated force, and continue to occupy Iraq indefinitely, and feed an endlessly growing Surveillance State, reports are emerging of the Deficit Commission hard at work planning how to cut Social Security, Medicare, and now even to freeze military pay. But a new New York Times article today illustrates as vividly as anything else what a collapsing empire looks like, as it profiles just a few of the budget cuts which cities around the country are being forced to make. This is a sampling of what one finds:

Plenty of businesses and governments furloughed workers this year, but Hawaii went further — it furloughed its schoolchildren. Public schools across the state closed on 17 Fridays during the past school year to save money, giving students the shortest academic year in the nation.

Many transit systems have cut service to make ends meet, but Clayton County, Ga., a suburb of Atlanta, decided to cut all the way, and shut down its entire public bus system. Its last buses ran on March 31, stranding 8,400 daily riders.

Even public safety has not been immune to the budget ax. In Colorado Springs, the downturn will be remembered, quite literally, as a dark age: the city switched off a third of its 24,512 streetlights to save money on electricity, while trimming its police force and auctioning off its police helicopters.

There are some lovely photos accompanying the article, including one showing what a darkened street in Colorado looks like as a result of not being able to afford street lights. Read the article to revel in the details of this widespread misery. Meanwhile, the tiniest sliver of the wealthiest — the ones who caused these problems in the first place — continues to thrive.

And let’s be clear about what it means to thrive while others suffer. This isn’t simply callous indifference or unrestrained greed; it is parasitic behavior.

4 thoughts on “What happened before we left Afghanistan”