Masjid Manhattan wants to keep a low profile — which is understandable. At the top of their home page is a bold disclaimer:

Please be advised that we are by no means affiliated with any other organization trying to build anything new in the area of downtown Manhattan.

That blanket disclaimer is their way of distancing themselves from the controversial Park51 project (aka Cordoba House, aka the Ground Zero mosque).

It’s sad that Masjid Manhattan feels the need to do this when it could reasonably describe itself as the Ground Zero mosque that was there before Ground Zero.

If two blocks away from the site of the World Trade Center can be described as “at Ground Zero” then so can three blocks away.

Do those who now object to the construction of a new Islamic center also favor that the existing mosque be removed? 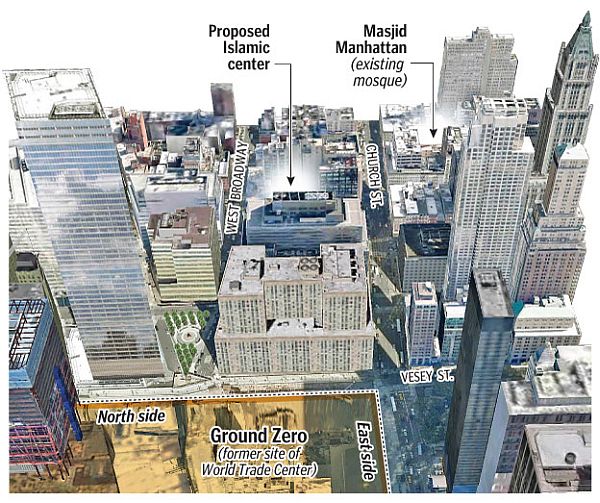 In all likelihood, most Americans who object to Park51 don’t even know that there is already a mosque nearby — one that opened the same year as the World Trade Center and now lacks sufficient space for all those Muslims living and working in the area who wish to gather for prayer. Neither would they know that one of the staunchest defenders of the project is the Jewish Congressman who represents the district, Jerry Nadler.

Unlike the rest of the Democrats in the New York congressional delegation, who have said as little as possible about the issue, Nadler has unabashedly supported the congregation’s right to build the mosque.

“It’s only a slap in the face if you think that the people in the congregation are responsible for al-Qaeda,” Nadler said as he sat in his office, where outdated posters, some featuring the Twin Towers, hung on the wall.

A staunch defender of Israel, Nadler said that it is logical that he is fighting for the rights of a Muslim congregation that he said he might very well vehemently disagree with. “Jews, of all people, should know that we have to support religious liberty,” he said. “Because if you can block a mosque, you can block a synagogue.”

And lest there be any doubt that the current controversy has been fomented by political opportunists, Frank Rich notes:

We owe thanks to Justin Elliott of Salon for the single most revealing account of this controversy’s evolution. He reports that there was zero reaction to the “ground zero mosque” from the front-line right or anyone else except marginal bloggers when The Times first reported on the Park51 plans in a lengthy front-page article on Dec. 9, 2009. The sole exception came some two weeks later at Fox News, where Laura Ingraham, filling in on “The O’Reilly Factor,” interviewed Daisy Khan, the wife of the project’s organizer, Imam Feisal Abdul Rauf. Ingraham gave the plans her blessing. “I can’t find many people who really have a problem with it,” she said. “I like what you’re trying to do.”