The lesson of the famous Millennium 2002 Challenge was that a cumbersome military machine that over-invests in high tech weaponry is vulnerable to swarming attacks. In the $250 million war game such an attack resulted in most of the US fleet being sunk within hours.

With the development of the F-35 Joint Strike Fighter — the most expensive defense program ever — going ahead, it looks like the Pentagon is still stuck in the past. Iran on the other hand — the country that grasps the jugular vein through which most of the world’s oil supply flows (the Strait of Hormuz) — today made clear that it knows exactly how to flex its muscles in that arena and it will do so with vessels designed for lethal swarming. 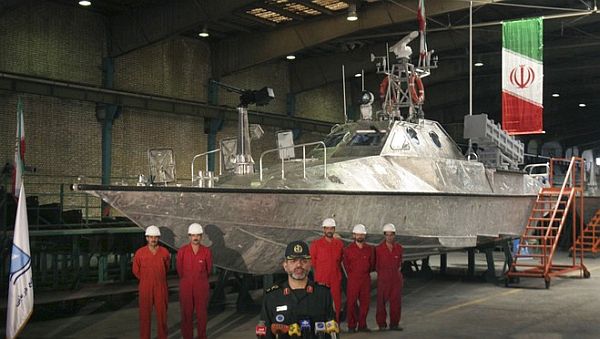 Iran began mass-producing two high-speed variants of missile-launching assault boats on Monday, warning its enemies not to “play with fire” as it boosts security along its coastline.

The inauguration of the production lines for the Seraj and Zolfaqar speedboats comes a day after President Mahmoud Ahmadinejad unveiled Iran’s home-built bomber drone, which he said would deliver “death” to Iran’s enemies.

Iran’s state news agency IRNA reported that the Seraj (Lamp) and Zolfaqar (named after Shiite Imam Ali’s sword) boats would be manufactured at the marine industries complex of the defence ministry.

“Today, the Islamic Republic of Iran is relying on a great defence industry and the powerful forces of Sepah (Revolutionary Guards) and the army, with their utmost strength, can provide security to the Persian Gulf, the Sea of Oman and Strait of Hormuz,” Vahidi said.

He issued a stern warning to Iran’s foes.

“The enemy must be careful of its adventurous behaviour and not play with fire because the Islamic Republic of Iran’s response would be unpredictable,” IRNA quoted him as saying.

“If enemies attack Iran, the Islamic Republic of Iran’s reaction will not be restricted to one area. The truth of our defence doctrine is that we will not attack any country and that we extend our hand to all legitimate countries.”

Meanwhile, in yet another response to Jeffrey Goldberg’s prediction of an Israeli attack on Iran, the former UN chief weapons inspector, David Kay, suggests that Israel is using the issue in order to press the Obama administration to ease its pressure on settlements and the need to make concessions to the Palestinians.

… Israel is engaged in psychological warfare with the Obama administration — and it only partly concerns Iran.

With regard Iran, Israel clearly understands that any unilateral military action it took against Iran without U.S. knowledge and support could have consequence of strategic importance for Israel and might even make an attack on Iran of limited benefit. Israel would much rather have the U.S. with it in an attack on Iran, or, even better, would be if the U.S. executed the attack entirely on its own.

But beyond Iran, of probably greater importance to the current Israeli government is avoiding the Obama administration pushing it into a choice between settlements and territorial arrangements with the Palestinians that it is unwilling to make and permanent damage to its relationship with the U.S. Hyping the Iranian nuclear program and the need for early military action is a nice bargaining counter. The U.S. certainly cannot join or lead an attack on Iran while pushing the Israeli government to the brink on settlements and concessions to the Palestinians. Or if the U.S. wants to avoid an imminent Israeli strike, it must make concessions to Israel on the Palestinian issues.