At The Atlantic, Max Fisher looks at five long-term effects of the Pakistan floods:

After weeks of flooding in Pakistan displaced two million people and left more than 10 million at risk of disease outbreak because they lack access to clean water, renewed flooding in Pakistan has displaced an additional one million people over the past 48 hours alone, setting back a relief effort that has struggled due to paltry donations. The displaced, often physically inaccessible to relief workers due to Pakistan’s badly damaged infrastructure, face threats of disease, starvation, and dehydration. But even once the immediate humanitarian crises of the flood pass, experts say the floods will leave their impact on Pakistan and the region for years or decades.

Rebecca Barber, from Oxfam, recounts some of the personal losses incurred by individuals:

In a camp in Khairpur, in Sindh, a man told me that he had paid 20,000 rupees ($A260) to evacuate himself and his family from his village when the flood warning came. To cover the costs, he sold the household’s entire crop of wheat. Between himself, his father and his uncle, the family had owned 13 buffalo. But they couldn’t afford to bring them with them when they evacuated, and all drowned when the floodwaters washed through the village. Three of his brothers have stayed behind, camping out on some nearby high land to keep an eye on what’s left of their homes. The village is under more than 1.5 metres of water, and he says he thinks it will be two years before they’ll be able to cultivate again.

In another camp, a man told me that his family had left behind eight goats, two cows and two buffalo when the army evacuated them. He and his family were “tenant farmers” – living on and cultivating the landlord’s land. In addition to the goats, cows and buffalo, they’d owned a small vegetable plot. They’d subsisted day to day on the small profits from the livestock, the vegetables they grew themselves, and a small potion of the landlord’s crops. But the work won’t start again until January next year, when the time for harvesting sugarcane comes around. Until then, he says he’ll go to one of the cities and look for casual labouring work. He won’t get more than 100 rupees (a bit over $1) a day though, nothing like enough to feed a family of 10. And there’s no savings to see them through. His daughter said she’d lost the dowry she’d kept in a trunk for six years: clothes, gold, cooking utensils, and cash. 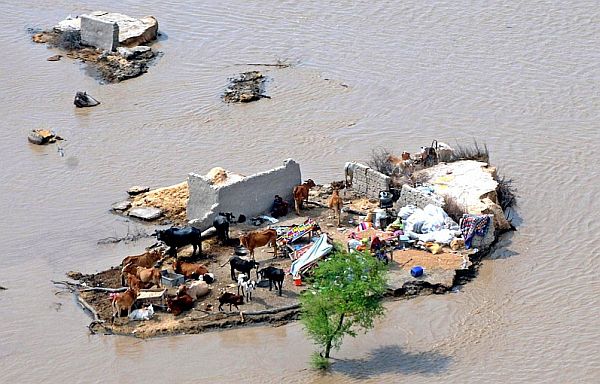 2 thoughts on “Pakistan’s misery shows no sign of abating”