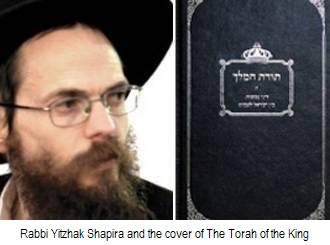 When I went into the Jewish religious book emporium, Pomeranz, in central Jerusalem to inquire about the availability of a book called Torat Ha’Melech, or the King’s Torah, a commotion immediately ensued. “Are you sure you want it?” the owner, M. Pomeranz, asked me half-jokingly. “The Shabak [Israel’s internal security service] is going to want a word with you if you do.” As customers stopped browsing and began to stare in my direction, Pomeranz pointed to a security camera affixed to a wall. “See that?” he told me. “It goes straight to the Shabak!”

As soon as it was published late last year, Torat Ha’Melech sparked a national uproar. The controversy began when an Israeli tabloid panned the book’s contents as “230 pages on the laws concerning the killing of non-Jews, a kind of guidebook for anyone who ponders the question of if and when it is permissible to take the life of a non-Jew.” According to the book’s author, Rabbi Yitzhak Shapira, non-Jews are “uncompassionate by nature” and should be killed in order to “curb their evil inclinations.” “If we kill a gentile who has has violated one of the seven commandments… there is nothing wrong with the murder,” Shapira insisted. Citing Jewish law as his source (or at least a very selective interpretation of it) he declared: “There is justification for killing babies if it is clear that they will grow up to harm us, and in such a situation they may be harmed deliberately, and not only during combat with adults.”

An influential Israeli rabbi known for his vitriolic pronouncements against Arabs says Palestinians and their leader should “perish from this world.”

Israel Army Radio quoted Ovadia Yosef Sunday as saying the Palestinians were “evil, bitter enemies of Israel” and Palestinian President Mahmoud Abbas should be struck with a plague. He made the remarks in a Saturday night sermon.

The United States on Sunday condemned remarks by the spiritual leader of Israel’s leading ultra-Orthodox party, Rabbi Ovadia Yosef, who said the Palestinians should “perish”.

“We regret and condemn the inflammatory statements by Rabbi Ovadia Yosef,” U.S. State Department spokesman Philip J. Crowley. “These remarks are not only deeply offensive, but incitement such as this hurts the cause of peace.”