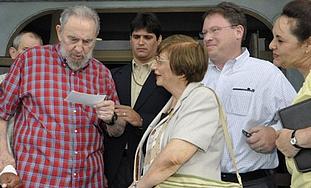 Jeffrey Goldberg just went to visit the father of the Cuban revolution, Fidel Castro, and was surprised and pleased to hear the 84-year-old castigate Iran’s President Ahmadinejad and denounce anti-Semitism:

Over the course of this first, five-hour discussion, Castro repeatedly returned to his excoriation of anti-Semitism. He criticized Ahmadinejad for denying the Holocaust and explained why the Iranian government would better serve the cause of peace by acknowledging the “unique” history of anti-Semitism and trying to understand why Israelis fear for their existence.
[…]
He said the Iranian government should understand the consequences of theological anti-Semitism. “This went on for maybe two thousand years,” he said. “I don’t think anyone has been slandered more than the Jews. I would say much more than the Muslims. They have been slandered much more than the Muslims because they are blamed and slandered for everything. No one blames the Muslims for anything.”

As an elder statesman and revolutionary leader, Castro retains some influence, but to say ‘no one blames the Muslims for anything,’ makes it sound like he’s a man living in a time warp.

Has the post-9/11 Islamophobia now sweeping Europe and rising in America, somehow escaped Castro’s attention? Does he not know that even in Germany, whose national consciousness should have been permanently seared by the memory of the horrific consequences of ethnic hatred, anti-Muslim rhetoric now finds a widening and receptive audience. “Germany is slowly becoming a state that is dominated by exaggerated fears and that exhibits the beginnings of an Islamophobic society,” writes Erich Follath in Der Spiegel.

10 thoughts on “Castro: ‘No one blames the Muslims for anything’”