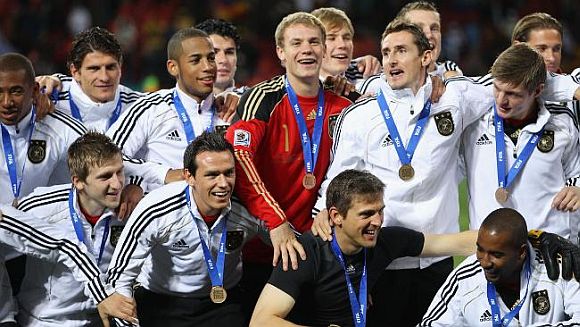 It wasn’t just Germans who were disappointed to see their team fail to win the 2010 World Cup in South Africa this summer. If this was the team that represented “multi-kulti”, for most of us who had the pleasure of watching their performance, the response was: let’s have more — not: this is an utter failure. Did Angela Merkel so quickly forget?

In The Guardian, Philip Oltermann writes:

Today, when I heard reports of Angela Merkel announcing that multiculturalism had “utterly failed”, my first thoughts were: who is she talking about? I am German, and I have a sister whose three boys are half-Peruvian. My brother’s children are part-Japanese. My partner is English. Were we all utter failures?

“Multi-kulti” covers a grey area somewhere between co-existence and co-operation, and one hopes the German chancellor was trying to speak in favour of team-play and against mere tolerance. My guess is that Merkel wasn’t talking about us, or about Poles, Italians or Greeks living in Germany, but about her country’s 4 million-strong Muslim population – in which case she has still chosen her words terribly badly. The result is a faux pas uncharacteristic of a politician who has won a reputation for treading quietly in matters diplomatic.

So what made her say it? The question over how to integrate Muslim migrants and the rest of German society is hardly new: politicians and commentators have been discussing it ever since the first wave of Gastarbeiter (migrant workers) arrived in the 1960s. If you look at the figures alone, there would be no particular reason to reheat the debate at this time: the number of Turkish immigrants into Germany in 2008 was as low as it had last been in 1983, according to Der Spiegel magazine, and the number of asylum applications is about a sixth of what it was in the mid-90s. More Turks returned to Turkey last year than came to live in Germany, which is actually bad news for the German economy, because with the population forecast to fall by 11.6 million by 2050, the country needs every qualified worker it can get its hands on.

2 thoughts on “The utter failure of multiculturalism?”