As President Obama’s Middle East peace initiative appears destined for failure, there is increasing speculation that a third intifada may follow, but whereas the first two Palestinian uprisings took place primarily inside the occupied territories, the third uprising may well start inside Israel. The Israeli-Arab town of Umm al Fahm is now a tinder box.

In The National, Jonathan Cook reports: 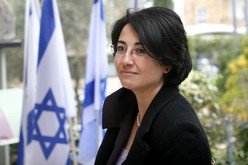 Israeli police and stone-throwing Arabs clashed in northern Israel yesterday as a group of Jewish right-wing extremists tried to march through the Arab-Israeli town of Umm al Fahm.

Two Arab legislators were injured in the violence. Afu Aghbaria, an Arab MP with the joint Jewish-Arab Communist party, said he had been hit in the leg.

Haneen Zoubi, a parliament member who has received hundreds of death threats since her participation in an aid flotilla to Gaza in the summer, also was among those hurt.

Ms Zoubi reported being hit in the back and neck by rubber bullets as she fled the area after police opened fire. In an interview with The National, she said she believed that she had been specifically targeted by police snipers after they identified her.

Israel deployed a secret police “mistaravim” unit (a Hebrew term meaning “disguised as an Arab”) in Umm al Fahm. In the image below, at least half a dozen such undercover operatives can be seen taking down demonstrators. The one on the far left appears to be firing a hand gun. The image is grabbed from news footage in a sequence that starts 38 seconds into the video shown below.

Israeli border police tactics in this week’s clashes in Umm al Fahm are being scrutinised.

The concentration and intensity of stun grenades and tear gas volleys unleashed on a few hundred Israeli Arab was unprecedented in many observers’ experience. 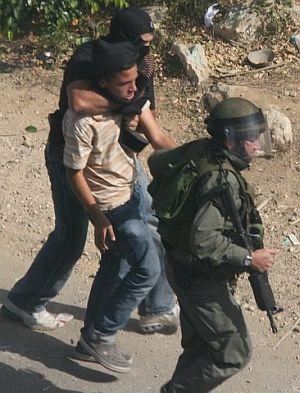 Israeli Channel 2 reported claims the tear gas volleys were fired in such a way because the crowd had just started turning on a suspected undercover police officer.

As Sameer Bazbaz captured in this sequence later [see image on the right], the undercover police were very active later, hiding among the crowd then pouncing on Israeli Arabs as uniformed colleagues swarmed to join them. 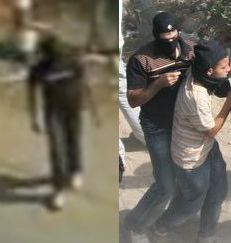 The undercover officer shown in the image above with his right arm firmly gripped around a teenager’s neck appears to be the same individual who can be seen at the beginning of the video above who 10 seconds in, can be seen at the road’s edge apparently picking up a stone to throw at Israeli police.