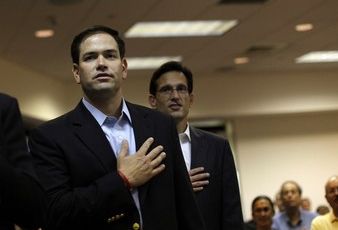 First they took Washington, now they’ll take Jerusalem? With victory in the congressional elections less than a day old, Florida Senator Marco Rubio (Rep.) who considers himself a ‘Tea Party’ member, is set to arrive in Israel on Sunday. Rubio’s visit so soon after the election win is a move that strengthens assessments that the congress in its current form will continue where it left off – at least where Israel is concerned.

The pro-Israeli AIPAC lobby applauded the election results, congratulated the winners and said: “It is abundantly clear that the 112th Congress will continue America’s long tradition of staunch support for a strong, safe and secure Israel and an abiding friendship between the United States and our most reliable ally in the Middle East.”

AIPAC expressed satisfaction over the fact that most pro-Israel senators were reelected and sent messages of congratulations to senators and congress members from both parties.

In a speech delivered to the Republican Jewish Coalition in June, soon after the Mavi Marmara flotilla massacre, Rubio said:

If Israel’s right to self-defense is undermined by efforts to lift its legal and necessary blockade of Gaza, which serves to stop Hamas from arming itself with deadly weapons, there will be lasting consequences, not just for Israel but also for the United States and ultimately for the world.

Israel’s enemies are — or will soon be — America’s enemies as well. They are emboldened any time they sense any sort of daylight between the United States and Israel. And now more than any other time, it is important that America has a firm and clear relationship with Israel.

In late August, Rubio said on Fox News (as he has said repeatedly) that Israel is America’s “best friend in the world.”