At truthdig, Nomi Prins reviews A Question of Values, by Morris Berman: 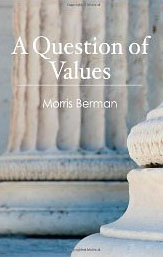 A Question of Values is an alternately sobering and inspiring collection of essays by noted historian and cultural critic Morris Berman. Berman pulls no punches in laying bare the truths about who we are, not just as a nation, but also as individuals wrapped up in the destructive pursuit of material excess. In the unswerving style of his other writings, he rips apart the national illusion of greatness.

The book is divided into four sections: “Lament for America,” “Mind and Body,” “Progress True and False” and “Quo Vadis?” (Where are you going?). Each part examines the American identity from a historical, spiritual, technological and alternative future perspective, respectively. Taken together, they ask the imperative questions: How did we get to this point, and how do we get out? Or will we? (Here being a country caught in a societal malaise of promoting external accumulation over internal compassion.) Taken together, the sections inspect our inner and outer fabric as a nation.

In Section I, the second essay, “Conspiracy vs. Conspiracy in American History,” Berman dissects America’s profound sense of self-importance, a central theme of the entire collection. He discusses how the “post-election euphoria in the United States over Barack Obama was nothing more than a bubble, an illusion, because the lion’s share of the $750 million he collected in campaign contributions” came from Wall Street. Thus, the fact that Obama proceeded to promise to rein in Wall Street’s excesses lay in stark and rather public contrast to his own connections with the banks.

This political sleight of hand is part of a larger problem for which Berman lists four descriptive conspiracies (or fallacies): First, that we are a chosen people (so we get to do whatever we want); second, that America itself is a kind of religion; third, that we must endlessly expand, whether it be geographically or financially; and, lastly, that our national character is composed of extreme individuals going back to our colonization. This he considers to be the main reason why “American history can be seen as the story of a nation consistently choosing individual solutions over collective ones.”

8 thoughts on “America the material”