“Israel is not the center of international attention,” Prime Minister Benjamin Netanyahu asserted shortly before the Wikileaks released a cache of 250,000 American diplomatic cables. 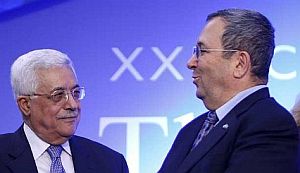 If he was confident that that was the case, why would Bibi draw attention to the fact? Perhaps because he knew that some of the leaks would serve his interests in multiple ways, not the least of which being that they further damage the credibility Mahmoud Abbas as top political representative of the Palestinian people. In other words, they would help reinforce Abbas’ position as a leader possessing enough authority to negotiate but not enough to make a deal.

It has long been claimed that Abbas supported Israel’s effort to topple Hamas through the war on Gaza. Wikileaks now provides hard evidence that the Palestinian Authority was indeed given advance notice of Operation Cast Lead.

At the end of May, 2009, Israel’s defense minister Ehud Barak met a Congressional delegation from the House Committee on Foreign Affairs led by Congressman Ackerman. In that meeting, Barak “explained that the GOI [Government of Israel] had consulted with Egypt and Fatah prior to Operation Cast Lead, asking if they were willing to assume control of Gaza once Israel defeated Hamas.” Naturally both parties declined, but the point is that they were then in a position to intercede and try and prevent the war — or, sit back and wait to see whether Israel would succeed in dislodging their common nemesis.

Having colluded with Israel in this way, the Palestinian Authority then put itself in a position to be blackmailed and subsequent reports suggest that this is indeed what happened when Israel later wanted to see the Goldstone Report blocked in the UN.

The Shaliab news agency quoted informed sources in Washington as saying that a meeting between PA representatives and an Israeli delegation took place in Washington last week to persuade the PA to withdraw its support for the Goldstone Report. This report could not be confirmed by TAAN.

The source told Shahab that the PA officials initially rejected the Israeli request, until Israeli officer Eli Ofarham showed up and displayed on his laptop a videotaped file showing Mahmoud Abbas urging Israel war minister Ehud Barak to continue the war on Gaza.

The sources also revealed that the PA official also listened to a recorded telephone conversation between director of the general staff office Dov Weissglas and Abbas’s aide Tayeb Abdelrahim in which the latter called on Israel to invade the refugee camps of Jabaliya and Al-Shati and said that the fall of those camps would end the rule of Hamas.

Weissglas, according to the record, said that this would lead to thousands of casualties among citizens, but Abdelrahim stressed that they all elected Hamas and chose their own destiny.

The comfort Netanyahu is drawing from the Wikileaks revelations goes much further. The Israeli claim that it belongs to a de facto alliance with so-called moderate Arab states with whom it shares an equal fear of a nuclear-armed Iran, is now clearly substantiated.

King Abdullah of Saudi Arabia has repeatedly urged the United States to attack Iran to destroy its nuclear programme, according to leaked US diplomatic cables that describe how other Arab allies have secretly agitated for military action against Tehran.

The revelations, in secret memos from US embassies across the Middle East, expose behind-the-scenes pressures in the scramble to contain the Islamic Republic, which the US, Arab states and Israel suspect is close to acquiring nuclear weapons. Bombing Iranian nuclear facilities has hitherto been viewed as a desperate last resort that could ignite a far wider war.

The Saudi king was recorded as having “frequently exhorted the US to attack Iran to put an end to its nuclear weapons programme”, one cable stated. “He told you [Americans] to cut off the head of the snake,” the Saudi ambassador to Washington, Adel al-Jubeir said, according to a report on Abdullah’s meeting with the US general David Petraeus in April 2008.

Wikileaks has at this point (Sunday evening) released just 220 out of 251,287 leaked cables. They say the remaining cables will be released over the next few months. “The subject matter of these cables is of such importance, and the geographical spread so broad, that to do otherwise would not do this material justice.”

This will no doubt be an effective media strategy that serves to extend the story, but in the name of transparency, Wikileaks should explain how exactly they’ve arrived at their own cherry-picking process. As every news editor knows, picking and choosing what to highlight and when has as much if not more impact in shaping the news than the reporting itself.

If getting all this information into the public domain really serves the greatest interest, why the delay?