Is WikiLeaks diversifying its cable supply line? As of 8.00PM US Eastern, the WikiLeaks Cablegate site lists just one cable originating from the US Embassy in Beirut.

The Lebanese newspaper Al Akhbar however, has published two other cables from Beirut, here and here. This might imply that WikiLeaks has picked out a handful of cables that it is going to feed to news outlets other than The Guardian, El País, Le Monde, and Der Spiegel.

The summary below comes from a March 2008 secret cable and describes a meeting with Elias Murr, then Lebanon’s defense minister and now also deputy prime minister: 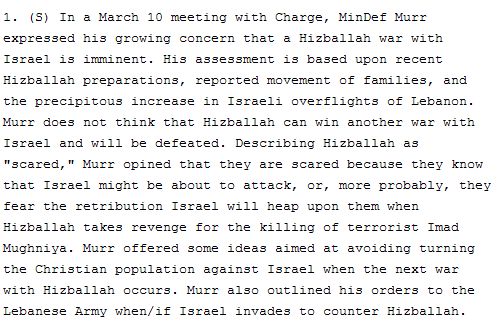 In the cable mentioned, the Lebanese Minister of Defense Elias al-Murr discusses with U.S. Embassy officials his preparations for an impending war with Israel, which involved sequestering the Lebanese Army in its bases until Hizbullah is destroyed…

What makes this leak especially damning is the fact that al-Murr specifically mentions his meeting with General Michel Sleiman (who, in March 2008, was still the commander of the Lebanese Army, and not yet the President of Lebanon) and talks about sharing his plans with him. Today, al-Murr is considered to be one of the President’s key ministers, so it’s quite possible that the toxic nature of this scandal will spread beyond the Ministry of Defense all the way to the Presidential Palace.

There has been a lot of noise over the past few weeks from March 8 circles to the effect that President Sleiman is no longer considered a “consensual” president (because of his support for Hariri’s bid to table the false witness file until after the STL indictment is released). The Wikileaks scandal is going to provide the perfect excuse for Hizbullah and Aoun to go on the offensive again against the STL and the March 14 camp. I would not be surprised if Sleiman demands al-Murr’s resignation, just to save his own position.

As for whether Hezbollah or anyone else in Lebanon would actually find these machinations surprising, one of Qifa Nabki‘s commenters, “Shai,” is probably right on target when saying:

Seems to me Hezbollah is perfectly happy when the Lebanese Army stays out of the game. What better than to be deemed the sole “defender of Lebanon”? Who could ask such a defender to put down their arms, when the so-called “official army” stays indoors to watch the war on TV?

For Hezbollah, it’s a win-win.

1 thought on “Cables from Beirut”