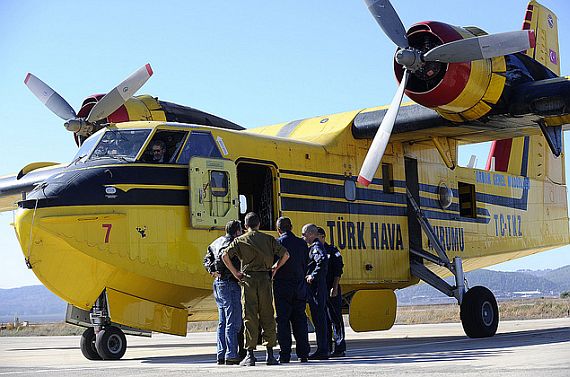 Turkish firefighters arriving in Israel after Netanyahu declares, 'We do not have what it takes to put out the fire, but help is on the way.'

“When I look out my window today and see a tree standing there, that tree gives me a greater sense of beauty and personal delight than all the vast forests I have seen in Switzerland or Scandinavia. Because every tree here was planted by us.”
– David Ben Gurion, Memoirs

“Why are there so many Arabs here? Why didn’t you chase them away?”
– David Ben Gurion during a visit to Nazareth, July 1948

Four days after Israeli Prime Minister Benjamin Netanyahu announced plans to place thousands of migrant workers in a prison camp deep in the Negev Desert because, as he claimed, they pose a “threat to the character of [the] country,” a burning tree trunk fell into a bus full of Israeli Prison Service cadets, killing forty passengers. The tree was among hundreds of thousands turned to ash by the forest fire pouring across northern Israel, and which now threatens to engulf outskirts of Haifa, Israel’s third-largest city. Over the last four days, more than 12,300 acres have burned in the Mount Carmel area, a devastating swath of destruction in a country the size of New Jersey. While the cause of the fire has not been established, it has laid bare the myths of Israel’s foundation.

Israelis are treating the fire as one of their greatest tragedies in recent years. A friend who grew up in the Haifa area told me over the weekend that he was devastated by the images of destruction he saw on TV. His friend’s brother was among those who perished in the bus accident. Though he is a dedicated Zionist who supported Netanyahu’s election bid in 2008, like so many Israelis, he was furious at the response — or lack of one — by the government. “Our leaders are complete idiots, but you already know that,” he told me. “They invested so much to prepare for all kinds of crazy war scenarios but didn’t do anything to protect civilians from the basic things you are supposed to take for granted.”

On 3 December, Netanyahu informed the country, “We do not have what it takes to put out the fire, but help is on the way.” To beat back the blaze, Bibi has had to beg for assistance from his counterpart in Turkey, Recep Tayyip Erdogan, the Western-backed Palestinian Authority and Israel’s American and British patrons. Israel is a wealthy country which boasts to the world about its innovative spirit — its US-based lobbyists market it as a “Start-Up Nation” — but its performance during the forest fire revealed the sad truth: its government has prioritized offensive military capacity and occupation maintenance so extensively that it has completely neglected the country’s infrastructure, emergency preparedness and most of all, the general welfare of its citizens.