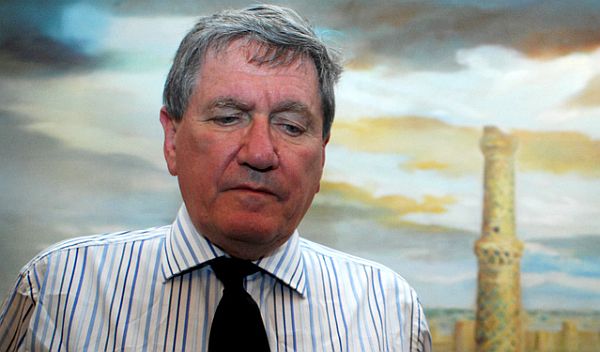 The Washington Post reports that Richard Holbrooke’s final words before entering surgery in which he died yesterday evening, were these: “You’ve got to stop the war in Afghanistan.”

Did Obama’s Af-Pak envoy go seriously off-message in the last moments of his life and reveal his abhorrence for what has become President Obama’s war? And more to the point, was the White House disturbed that this might be Holbrooke’s legacy — right at the moment that the administration was ready to wheel out its stay-on-course message about the war’s progress?

In the following account, the Post uses a phrase beloved by its reporters and those at the New York Times: emerged.

News pops up like mushrooms from an invisible mycelium. For a reporter to report on how a story emerges — well that would be unseemly and unnecessary, a distraction from the narrative that is supposedly the reader’s sole interest.

What possible concern could we have in understanding the chain of events that led to an anti-war death-bed story getting airbrushed out of the record?

Thank goodness we now know that Holbrooke was not eager to end the war.

As friends and colleagues from four decades of diplomatic life reflected on the intensity of Richard C. Holbrooke’s dedication, many were not surprised to learn that concerns about the Afghanistan war were apparently among his final thoughts.

Following Holbrooke’s death, The Washington Post, citing his family members, reported that the veteran diplomat had told his physician just before surgery on Friday to “stop this war.”

But on Tuesday a fuller account of the tone and contents of his remarks emerged.

As Dr. Jehan El-Bayoumi was attending to Holbrooke in the emergency room at George Washington University Hospital, she told him to relax and asked what she could do to comfort him, according to an aide who was present. Holbrooke, who was in severe pain, said jokingly that it was hard to relax because he had to worry about the difficult situation in Afghanistan and Pakistan.

El-Bayoumi, an Egyptian-American internist who is Secretary of State Hillary Rodham Clinton’s physician, replied that she would worry for him. Holbrooke responded by telling her to end the war, the aide said.

The aide said he could not be sure of Holbrooke’s exact words. He emphasized Tuesday that the comment was made in painful banter, rather than as a serious exhortation about policy. Holbrooke also spoke extensively about his family and friends as he awaited surgery by Farzad Najam, a thoracic surgeon of Pakistani descent.

Hmmm… Holbrooke’s surgeon was of Pakistani descent… No, I promise, I won’t go there.