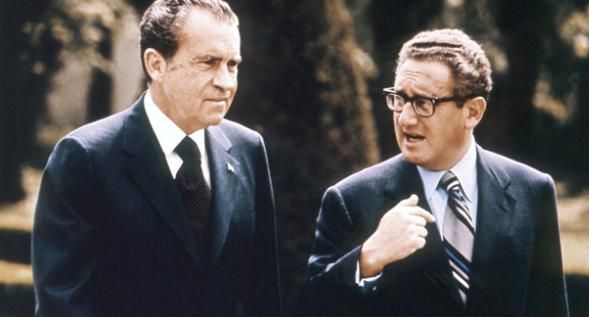 From the audio tape, it is clear that Nixon was concerned about pressure he would face from the American Jewish community on this issue.

Since the tapes were made public earlier this month, prominent members of the Jewish community have been lining up to speak in Kissinger’s defense — an effort, they say, which is intended to put Kissinger’s callousness in context.

“The Nixon Tapes should not change history’s verdict on the important contributions and ultimate legacy of Henry Kissinger,” said the Anti-Defamation League’s Abraham Foxman.

Christopher Hitchens, having in recent years been distracted by 9/11, returns to the subject of Kissinger, and asks, “what if we did, indeed, accept the invitation to ‘remember the context of his entire life’?”

Here’s what we would find: the secret and illegal bombing of Indochina, explicitly timed and prolonged to suit the career prospects of Nixon and Kissinger. The pair’s open support for the Pakistani army’s 1971 genocide in Bangladesh, of the architect of which, Gen. Yahya Khan, Kissinger was able to say: “Yahya hasn’t had so much fun since the last Hindu massacre.” Kissinger’s long and warm personal relationship with the managers of other human abattoirs in Chile and Argentina, as well as his role in bringing them to power by the covert use of violence. The support and permission for the mass murder in East Timor, again personally guaranteed by Kissinger to his Indonesian clients. His public endorsement of the Chinese Communist Party’s sanguinary decision to clear Tiananmen Square in 1989. His advice to President Gerald Ford to refuse Alexander Solzhenitsyn an invitation to the White House (another favor, as with spitting on Soviet Jewry, to his friend Leonid Brezhnev). His decision to allow Saddam Hussein to slaughter the Kurds after promising them American support. His backing for a fascist coup in Cyprus in 1974 and then his defense of the brutal Turkish invasion of the island. His advice to the Israelis, at the beginning of the first intifada, to throw the press out of the West Bank and go for all-out repression. His view that ethnic cleansing in former Yugoslavia was something about which nothing could be done. Forget the criminal aspect here (or forget it if you can). All those policies were also political and diplomatic disasters.

We possess a remarkably complete record of all this, in and out of office, most of it based solidly on U.S. government documents. (The gloating over Bangladesh comes from July 19, 1971.) And it’s horribly interesting to note how often the cables and minutes show him displaying a definite relish for the business of murder and dictatorship, a heavy and nasty jokiness (foreign policy is not “a missionary activity”) that was by no means always directed, bad as that would have been, at gratifying his diseased and disordered boss. Every time American career diplomats in the field became sickened at the policy, which was not seldom, Kissinger was there to shower them with contempt or to have them silenced. The gas-chamber counselor is consistent with every other version of him that we have.

When in 2001 Hitchens took on the noble if perhaps quixotic endeavor of attempting to have Kissinger put on trial for war crimes and crimes against humanity, who could have anticipated that the polemicist would soon become so severely blown off course, or that almost a decade later the octogenarian would probably outlive his most furious and much younger critic.