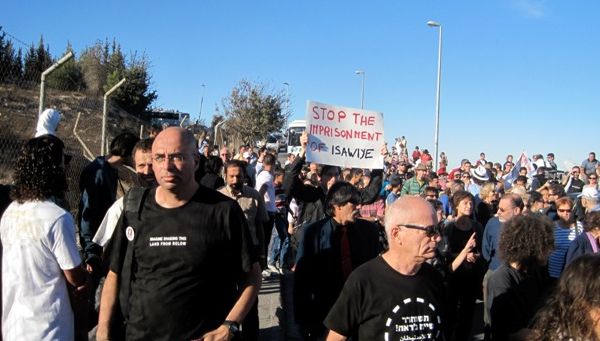 Half way down a hill, sandwiched between Jerusalem’s Hadassa hospital and Hebrew University, sits the compact and overcrowded occupied East Jerusalem village of Issawiya.

Before crossing the makeshift police checkpoint of concrete block obstacles at the edge of the University and entering the neighbourhood – which resembles more of a besieged West Bank refugee camp than a Jerusalem municipality – there is a clearly marked ‘Dead End’ street sign. On the main road leaving towards the hospital on the other side of the neighbourhood there is a wall of concrete cubes blocking any traffic, leaving just a narrow space for pedestrians to cross.

Although the Jewish dominated Hebrew University has expanded onto Issawiya’s land, the picture of Jerusalem from both places couldn’t be more different. While Israeli students attend classes oblivious to life beyond the ‘dead end’, Israeli security forces have orchestrated a campaign of regular night time arrest raids against Issawiya residents in an effort to halt growing popular resistance to segregation, home demolition and land confiscation.

The recent Israeli home demolitions, increasing the pressure on the already squeezed Palestinian community, have given rise to local youth organising ruckus street demonstrations, clashing with Israeli police and border guards at the neighbourhood checkpoints. Now the campaign has expanded and the youth of Issawiya have been joined by Israeli anti-occupation activists.

With Israel continuing to expand Jewish settlements in East Jerusalem, squeezing and displacing the Palestinian residents under the banner of an undivided Israeli capital (a claim rejected by most of the world), the Palestinian Authority has been powerless in defending the residents of their future capital. Meanwhile, despite murmurs of discontent from Washington and the international community, international diplomacy has proven just as ineffective in advocating for the rights of Jerusalem’s Palestinian residents.

Now, failed by national leadership and abandoned by an international community to the mercy of an Israeli government that is forcing them from sight in order to make way for Israeli control and settlement, Palestinian residents are taking it on themselves to defend their land, rights and presence. [Continue reading.]