“Something completely different” is a new feature on War in Context where you can expect to find items that have little or nothing to do with the Middle East or the United States’ imperial misadventures. 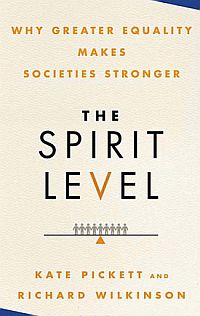 John Steinbeck observed that “a sad soul can kill you quicker, far quicker, than a germ.”

That insight, now confirmed by epidemiological studies, is worth bearing in mind at a time of such polarizing inequality that the wealthiest 1 percent of Americans possess a greater collective net worth than the bottom 90 percent.

There’s growing evidence that the toll of our stunning inequality is not just economic but also is a melancholy of the soul. The upshot appears to be high rates of violent crime, high narcotics use, high teenage birthrates and even high rates of heart disease.

That’s the argument of an important book by two distinguished British epidemiologists, Richard Wilkinson and Kate Pickett. They argue that gross inequality tears at the human psyche, creating anxiety, distrust and an array of mental and physical ailments — and they cite mountains of data to support their argument.

“If you fail to avoid high inequality, you will need more prisons and more police,” they assert. “You will have to deal with higher rates of mental illness, drug abuse and every other kind of problem.” They explore these issues in their book, “The Spirit Level: Why Greater Equality Makes Societies Stronger.”

The heart of their argument is that humans are social animals and that in highly unequal societies those at the bottom suffer from a range of pathologies. For example, a long-term study of British civil servants found that messengers, doormen and others with low status were much more likely to die of heart disease, suicide and some cancers and had substantially worse overall health.

There’s similar evidence from other primates. For example, macaque monkeys are also highly social animals, and scientists put them in cages and taught them how to push a lever so that they could get cocaine. Those at the bottom of the monkey hierarchy took much more cocaine than high-status monkeys.

Other experiments found that low-status monkeys suffered physical problems, including atherosclerosis in their arteries and an increase in abdominal fat. And as with monkeys, so with humans. Researchers have found that when people become unemployed or suffer economic setbacks, they gain weight. One 12-year study of American men found that when their income slipped, they gained an average of 5.5 pounds.

The correlation is strong around the world between countries with greater inequality and greater drug use. Paradoxically, countries with more relaxed narcotics laws, like the Netherlands, have relatively low domestic drug use — perhaps because they are more egalitarian.

Professors Wilkinson and Pickett crunch the numbers and show that the same relationship holds true for a range of social problems. Among rich countries, those that are more unequal appear to have more mental illness, infant mortality, obesity, high school dropouts, teenage births, homicides, and so on.

They find the same thing is true among the 50 American states. More unequal states, like Mississippi and Louisiana, do poorly by these social measures. More equal states, like New Hampshire and Minnesota, do far better.

So why is inequality so harmful? “The Spirit Level” suggests that inequality undermines social trust and community life, corroding societies as a whole. It also suggests that humans, as social beings, become stressed when they find themselves at the bottom of a hierarchy. [Continue reading.]

6 thoughts on “» Something completely different «”