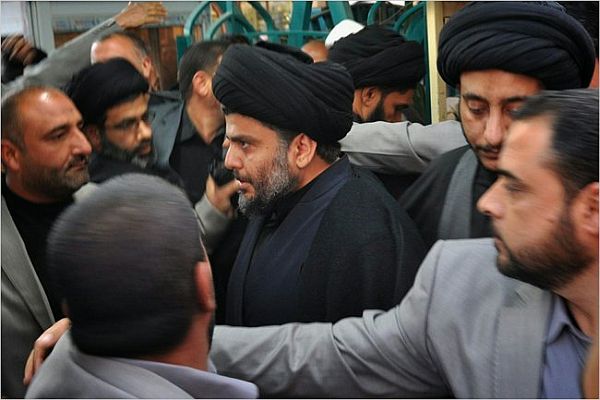 If one believes in such a thing as an arc of destiny, the one clear line that has spanned the last seven years in Iraq almost without wavering has been the ascent of Muqtada al-Sadr — the man who for so many years was referred to derisively by Western journalists as a “firebrand cleric.” Even now, while the New York Times adopts the more neutral “populist cleric”, Sadr is defined by what he opposes (he is “the United States’ most enduring foe”) and he is put on a par with the prime minister (“the rare Iraqi figure who can compete in stature with Prime Minister Nuri Kamal al-Maliki”). But unlike Sadr, Maliki holds his power through political office and the backing that office receives from the United States. No sooner that Maliki becomes a former prime minister than almost as soon he will likely become a forgotten prime minister. Sadr’s power base is far less ephemeral.

Anyone remember what Jay Garner, the first U.S. viceroy in Baghdad in 2003, answered when asked how long American troops would be in Iraq? “Look back on the Philippines around the turn of the 20th century,” he told an interviewer. “They were a coaling station for the navy, and that allowed us to keep a great presence in the Pacific. That’s what Iraq is for the next few decades: our coaling station that gives us great presence in the Middle East.” Instead, as radical anti-American cleric Muqtada al-Sadr made a triumphant return this week from self-imposed exile in Iran to assume a central role in the newly elected government, it is looking increasingly likely that the U.S. military presence in Iraq will be terminated by the end of this year.

The end of 2011 is, of course, when all U.S. troops are required to leave Iraq under the Status of Forces Agreement negotiated with the Iraqi government by the Bush Administration in December 2008. To stay beyond that, they’d have to be asked by the Iraqi government. But the assumption ever since the agreement, often publicly stated, has been that as that the deadline would be renegotiated. Indeed, in the year that followed the agreement, the U.S. spent $496 million on base construction in Iraq — bringing the total spent on putting down military roots in Iraq since 2005 to $2.1 billion. Four “superbases” have been constructed as hubs of the U.S. military presence there.

But the recently completed formation of a new Iraqi government underscores the fact that Iraqi sovereignty is real and U.S. influence there is limited.

1 thought on “Sadr’s sure rise to power”